What an incredible day! Today life went from proof of concept to we're doing this!


During our sunset walk along the beach, Craig rescued a horseshoe crab and I immediately wished my grandson, Simon, had been part of the experience and thanks to AT&T and FaceTime,  he was.   "Awesome", he exclaimed as I used my iPhone to zoom in.  Cedar, his little brother, wasn't so sure what was happening,  but Grandma's heart was warm to be able to pipe them into the walk on the beach. 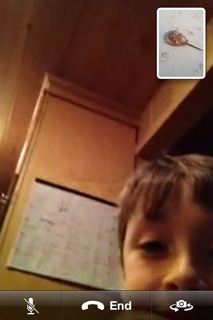 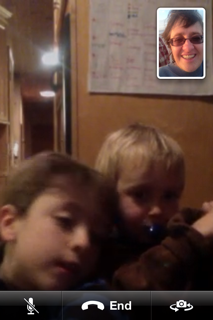 As we continued our walk, Craig and I debriefed about our day and marveled at the fact that today's technology makes it possible for us to do what we are doing, and this time it was our turn to say "Awesome!". We seemed to have moved from a "proof of concept" stage to "we're doing it stage". 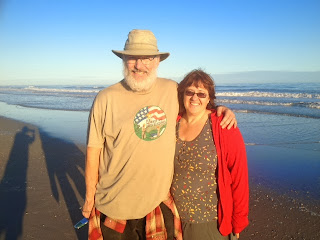 Craig spent most of the day setting up all the Google Apps for Education accounts necessary  for 400 K-3 Vermont students to start creating their ePortfolios.  His goal for his schools to go serverless and move to the cloud is paying off.  Since the days when he set up the first student run BBS on 300 baud modems, Craig has been paving the way in education.  His commitment to education and willingness to blaze new trails has been on of the things that has attracted me to him (first as a respected colleague and more recently as an amazing life partner).

My day was spent connecting with Vermont educators using a combination of technology tools.  In the morning,  I used Google's Hangout on Air to allow Vermont educator, Mr. Bill Holiday, to share his expertise of the Kennedy assassination with schools in Vermont and Nebraska as he walked the motorcade route in Dallas, Texas. Watching Mr. Holiday,on his cell phone, show us each location as he described the events of 50 years ago, alongside with the  the City of Dallas preparing for tomorrows events commemorating the 50th anniversary of the JFK assassination was, was yet another reminder that of the amazing power of technology to bridge the distance gap.

I continued the day  by making plans with other Vermont educators on how we will engage students from Kindergarten to high school in  the upcoming "Hour of Code" events as part of the Connected Voices project I launched earlier in the month called Think About It Thursday. 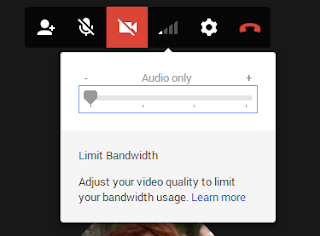 I also continued to use Google Chat, Google Docs, and Google Hangous to start planning next summer's offerings for Google Tools For Schools. I've learned how to conserve bandwidth by  switching My Google Hangout meetings to audio only, when appropriate. Google Hangout allows for the  personal touch of smiling faces to set the tone and for multiple parties to be part of the conversation, and it doesn't seem to detract when I switch to audio only, as my profile picture continues to represent me. This helps me preserve my data plan allowance to use for collaborations that require the full features of Google Hangouts.

I decided I had used enough bandwidth for the day and switched to the task of working on some screencast using Camtasia software--one of my favorite pieces of tech.  I left for our walk on the beach  with the satisfied feeling of a productive work day, made possible by the  power of today's technology tools to support anywhere, anytime collaboration.

Within minutes of turning off our computers, Craig and I were enjoying watching the sunset as we walked along the ocean -  that sure beats the daily commute home we use to have after a day's work. 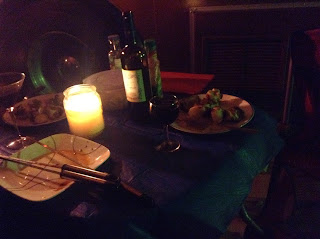 After the sunset, Craig cooked  chicken sheshkabob,  while I  pulled out a tablecloth, uncorked a bottle of Cabernet,  lit  a candle and set the table outside the bus.  I even added my new fun high-tech wireless Phillips HUE light to the mood setting.  We raised our wineglasses to today's technology that made today possible and later that evening I went online and purchased the domain name "LivingLearningMobile.com".