A lot of miles have passed since Lucie last wrote here.  We left the Washington DC area on November 15th, waiting until mid morning so as to avoid the notorious DC traffic.  We had a little incident on the way out of the campground.  I had pulled out of our campsite onto the campground road and left the Wanderlodge idling while I loaded the Saturn onto its dolly.  When I was done I did a walk around and was alarmed to see coolant dripping off the radiator at the front of the bus.  I remembered when I was checking the coolant level the day before finding a small valve above the radiator and thinking it must be for the windshield washer, which has never worked.  I opened the valve and promptly forgot about it.  Apparently it was a coolant system bleed line to let air out.  I guess we have no air bubbles in our cooling system now.  Lucie was not reassured by the steam rising in front of the windshield from the hot radiator as we pulled out of town.

We took the circumferential highway around the city, much to the chagrin of our new RV navigation software from Rand McNally.  I had decided on this app for our iPads because it was specifically written for RVs and I had hoped that it would at least give us an alternative route other than the straightest route through the center of DC.  When I overrode that it kept trying to route us along surface streets to reconnect to the inner city route.  Later as we were approaching the bridge over the Potomac it routed me on the local branch of 495, instead of taking the express with many fewer exits.  Our 30 year old RV is not fast.  As we've been migrating south I have been going 55mph on the Interstate, where the speed limit is often 70mph.  Being 56 feet long I'm often trapped in the slow lane by passing traffic when people want to merge onto the highway.  So, a barely passing grade for the Rand McNally RV navigation app, I hope they will improve it as time goes along.

We stopped in Virginia to get diesel, the first fuel stop since Massachusetts.  I was pleasantly surprised that the Wanderlodge got 7.4 MPG.  This is an improvement over the 5 to 6 MPG we got taking short trips around Vermont.

It was a pleasant day of traveling, I navigated our bus up and down the hills, going 55 in the right lane of I95 and Lucie sat next to me correcting on line projects that her grad students had done.  As it got dark we looked ahead using an iPad app called Allstays that listed truck stops, Walmarts and Cracker Barrel restaurants that allowed RVs to park overnight.  A Walmart a little south of Fayettville N. Carolina looked promising and Lucie called ahead and confirmed that they allowed RVs to park over night.  After checking in with the parking lot security we settled in for a good night's sleep between an 18 wheeler and several other RVs. 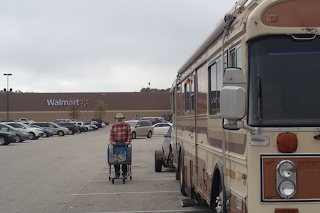 Our RV has good curtains so it stays dark inside and it is very easy to be lazy and sleep in, which is what we did the next morning.  After we got up we went into the Walmart and stocked up on groceries, finally hitting the road just before lunch time.  We got to our current campground, Huntington Beach Stat Park, just south of Myrtle Beach S. Carolina in the early afternoon, picked out our site and settled in.  Then as the sun was going down we went for a walk on the beach and watched the full moon rise over the Atlantic Ocean. 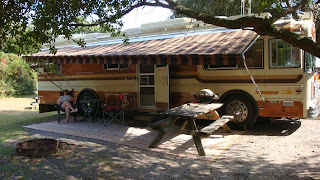 Huntington Beach is a lovely park with large campsites under live oak trees just behind the dunes.  We can hear the ocean waves crashing in the distance.  There are palm trees and a family of alligators in the marsh that you drive through to reach the campground.  Birds are singing, the sun is out and today it is in the 70's.

We've decided that we will hang out here for a week then take a couple of days to complete our journey to Cedar Key in Florida where we have a campground reservation for most of the month of December. 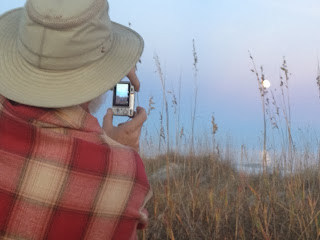 Posted by clyndes at 10:38 AM
Email ThisBlogThis!Share to TwitterShare to FacebookShare to Pinterest
Labels: beaches, oceans, South Carolina