We are finally NOT moving for a few weeks!  Hurray!  Although I made good use of the week long trek from New Jersey to Colorado, catching up on work while Craig drove  us westward.
We traveled over 1700 miles in 6 days. The passenger seat of the bus makes for a comfy office.  I was able to give my grad students lots of attention this week. This turned out to be timely since both online classes are entering project mode right now, with some students needing extra time to discuss their project ideas.  Craig was pretty proud of his network setup that made it possible for me to be video conferencing while we were traveling down the road!  I am thankful to have my own personal onsite tech support department wherever I happen to be working from.

In the afternoon I would start to check out possible places for us to pull over for the night.  It was my goal to use our Harvest Host membership more this year, and I was fortunate to find two wineries for us to stop at.

The first was Knob Hall Winery in Maryland
Turns out they were closed for the day, but we were welcomed anyway with a quick wine tasting.  We picked up a bottle of Cabernet to add to our growing collection of wine!  We need to DRINK MORE WINE… I think! We were told that we could park right in the driveway and exit (without unhitching)  our tow by following an exit road up ahead.  As we walked around looking for the exit road, all we could find was a field.  Walking through the field revealed a dirt road.  Craig concluded we might be able to PASS  if it doesn’t rain.  It rained!  So we didn’t take a chance and unhooked the jeep, turned around and headed out uneventfully in the morning. The second was Wyldewood Cellars  right off I-70.  Actually it still had the appearance of an old gas station with the gas tanks barricaded with wooden planks and invitations to DRINK MORE WINE! There were not many grapes in sight.  Turns out the ‘winery’  was really a ‘conveniently located’  distribution center right off I-70 -- go figure!  ;-)  They specialized in elderberry wine and gave us a variety to taste ranging from sweet Elderberry Mead to a dryer Cabernet/Elderberry reserve. We ended up walking away with two bottles - one as a gift for the  Mead-loving Warren and Allison who would soon be our host.  We enjoyed the second reserve bottle while we watched a lovely Kansas sunset. Hotel Walmart provided us with a place for the rest of our overnights.  Not only do Walmart stops provide a convenient location for  restocking on groceries, they usually are near at least one restaurant.  We’ve decided that any long drive days warrants a break from the RV at suppertime. Posted by Lucie deLaBruere at 7:08 PM No comments:
Email ThisBlogThis!Share to TwitterShare to FacebookShare to Pinterest

Wednesday morning was a rude awakening.  As I reached for my phone and saw the news - Trump Wins - I gasped with surprise and a few choice words slipped out.

I have been working hard to keep politics out of my public facing posts, and almost didn’t include anything here, but then I realized.. This is HISTORY!  Big History!  As we passed through 4 states in our drive today (Maryland, Pennsylvania, West Virginia, and Ohio)  I found myself seeing the landscape in hues of red and blue.  I found myself contemplating on  what makes different parts of the country blue, red, pink.  I’m not planning to make this blog post about those thoughts, but instead just want to acknowledge -- THIS HAPPENED TODAY  as we travelled west 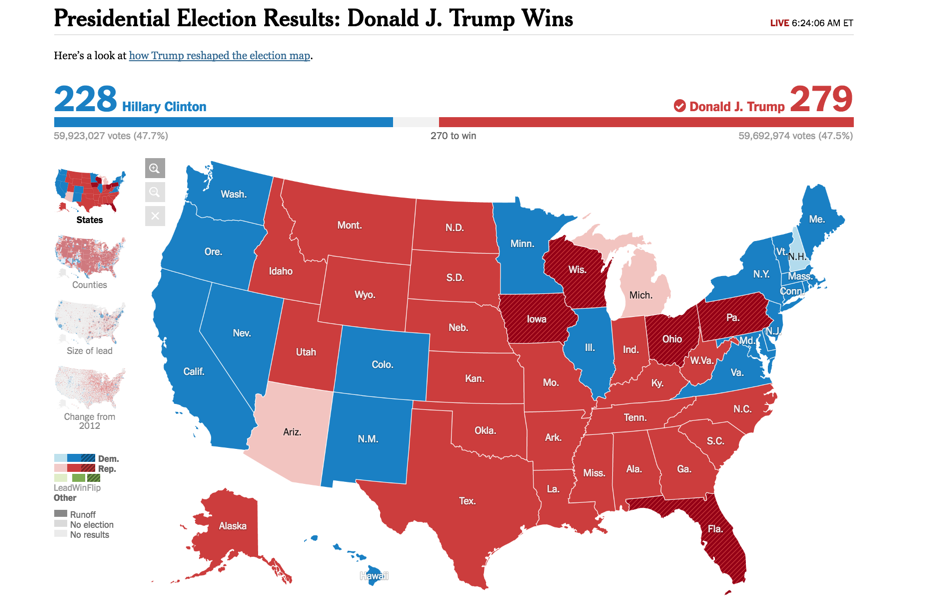 I found myself going back and forth between election news and my own work as Craig navigated  I-70.  I did my best trying to find another Harvest Host for us to stay in, but that would have meant going through Columbus Ohio during rush hour. So we stopped for the night at a Walmart about 10 miles shy of Columbus, unwinding with a Geek Date (Best Buy, Beer, and Wings).  It was impossible not to process the election and try to make sense of the world.

At 3 o’clock this morning I found myself wide awake.  By 4 I knew I was not going to get back to sleep and realized Craig had also been awake for a while.  By 5 we gave up and decided to get on the road and try to make it past Columbus before the morning commuter traffic. I think that was the first time we’ve taken the bus out on the road before dawn.   Our early morning talk made me realize that the general sense of uneasiness about the world was allowing uncertainties about work and lifestyle choices to surface and keeping us awake.  ;-(


Well one thing we knew for sure was that we had at least 5 more days to drive to reach Colorado - where we plan to linger through Thanskgiving.
Posted by Lucie deLaBruere at 4:08 AM No comments:
Email ThisBlogThis!Share to TwitterShare to FacebookShare to Pinterest
Labels: Election, Maryland, Ohio, Pennsylvania, Uncertainity, West Virginia

Almost 4 years ago we gave up our apartment and moved into our 1983 Bluebird bus full time.  After spending the Summer and Fall in Vermont navigating life in the bus, we hit the road for a 6 month tour of the Southeast (mostly Florida and Texas, that year) bringing the bus back around to Vermont where our living and learning lifestyle was surrounded by friends, family, and a more intense work schedule.

We repeated the exit strategy  out of Vermont for the next few years - with the bus leaving after VermontFest (Vermont's edtech conference traditionally held first Thursday and Friday in November). This was always a bit later than Craig wanted to leave, but he was a good sport about my need to be at this conference.  Not only is organizing the maker lounge fun,  skipping out  would NOT be a good career move for me right now. 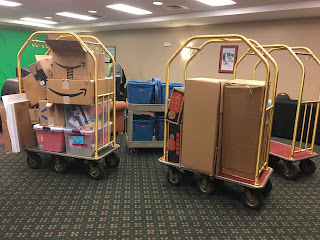 This year we did things a little different.  This year I stayed for the conference, but Craig left October 29 driving the bus to Turkey Swamp Park (about 30 minutes from his daughter's house). This way he got to spend quality time with Maggie and Peter, and   I got to stay behind putting in a SOLID week of work.   After a day at Randolph school, and a day at Bethel School,  I packed up EMMA with everything she needed to spend 3 days in at the Killington Grand Resort, where I was in charge of the Innovation / Maker Lounge for our state's ed tech conference (VermontFest).

I must say that splitting up to leave Vermont was a lot harder than I expected.
I had to pack everything that I wanted on the road for 6 months (EXCEPT the things I needed for a week in Vermont)  in the bus before Craig left.   On top of that, I had to limit what I would keep for my week in Vermont, but also needed back with me to the size of a suitcase that I take on a flight from VT to NY, where I would then transport possibly by train, tax, subway  as I couch surfed in NYC on my way to join my husband and our home in NJ a few days later!

I survived, but just barely!

After an INTENSE couple of days pulling off what I must say was a ROCKIN Maker/Innovation Lounge in Killington,  I unpacked and repacked and grabbed a flight to New York City, where I spent two nights with MY kids.  NOT only did I get to see Matt's brand new Co-op,  I also got to visit both their churches and enjoy a lovely Sunday filled with music and love and family.

Finally  almost 10 days after Craig left Vermont in our home,  I joined him at Turkey Swamp Park in New Jersey, which despite's its name turned out to be a very lovely campground - about 45 minutes from New York. This morning we started our 7 day trek from the East Coast to Colorado where we'll spend some time with Craig's son Warren and his wife Allison.

We lingered over coffee and took our time heading out (about 11:00 a.m)  waiting for morning commuters to be off the road.  I did a little research looking for some alternatives to Walmart and TruckStops and found a lovely Harvest Host just a few miles outside of Hagerstown Maryland. 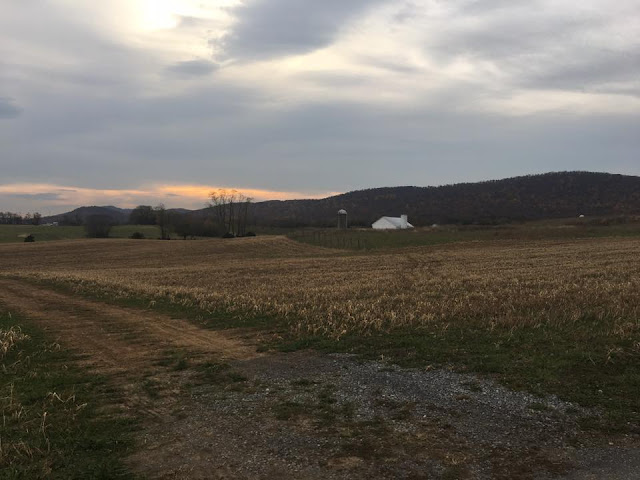 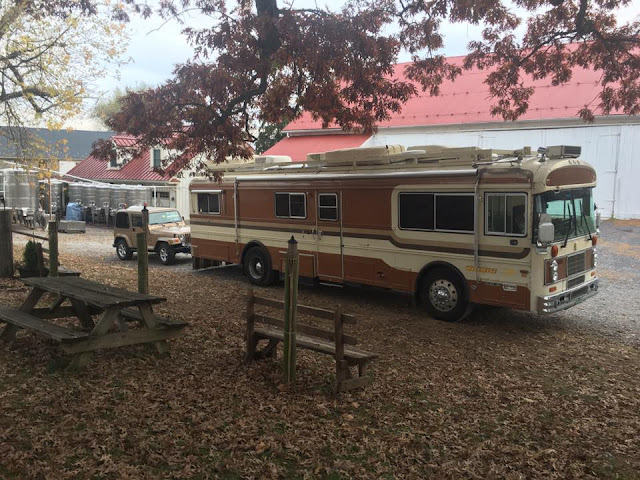 We're now both keeping an eye on election results come in, fingers crossed, as we surf around the web, write blog post, and gear up mentally for the next 6 days on the road.