Lucie tells me that it is not good to run away from things, so I should probably rethink the title for this post.  Maybe it should be, "Finding warm weather"! 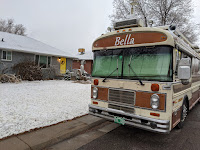 Our stay in the Denver area got colder as the month wore on.  Warren and Allison left for Hawaii and rather than Lucie and I leaving at the same time we stayed as a cold front moved through dumping snow.  I decided that making the run south through snow covered passes would not be wise, so we waited for a weather window. 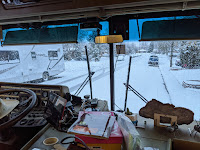 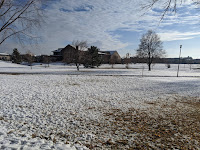 On November 23rd we grabbed a one day opening between snow storms and headed south to Santa Fe where we stayed at the rodeo grounds and went to dinner with our friend Jackie Gernstien.  We didn't stay beyond the one night because at 8,000' elevation it was cold.  The next day we headed further south to Deming NM where we were out of the freeze zone for the first time. 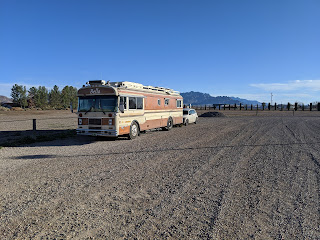 We spent the night at a Harvest Host site, a Winery just outside Deming with a large parking lot.  Although the camping was free, between the wine tasting and buying a couple of bottles we did leave a few dollars there. 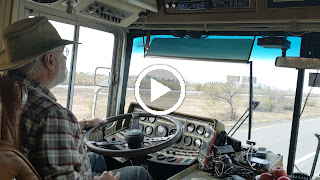 The next day we drove to Tucson.  We had made reservations at Cactus Country RV park because they had a hot tub.  However when we got there we discovered the hot tub was closed for renovations and would remain closed for the duration of our stay.  We decided to move on to our other choice, Desert Trails RV Park and stayed there for 2 weeks. 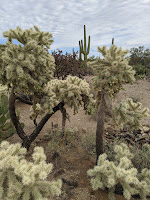 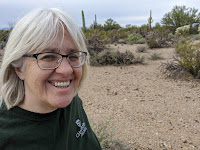 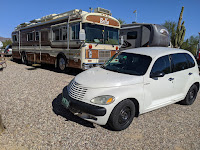 We thawed out in Tucson, the weather was wonderful.  We shared thanksgiving with the other campers at a potluck in the Rec Hall.  In the middle of our time there we took the PT Cruiser and drove up to Cottonwood AZ where my Father lives.  There we met my sister Joy who flew in from San Diego.  We all celebrated Dad's 88th birthday.  After 2 nights in an Airbnb we returned to Tucson, visiting our friend Steve Jerrett on the way through Phoenix. 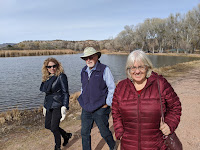 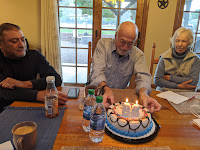 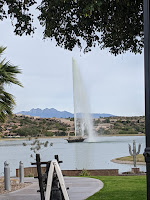 The remainder of our time in Tucson was spent working on the bus, hiking in the desert, going to music programs at the Rec Hall in the evening and Lucie working on a microprocessor enabled apron.  We even bought a sewing machine that now travels with us. 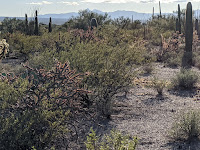 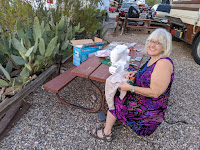 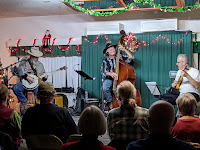 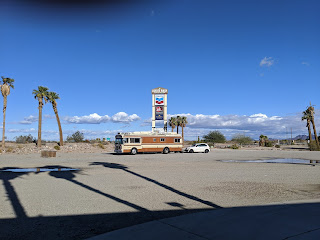 On December 9th we left Tucson headed for Holtville Hot Springs BLM campground west of Yuma in California.  We didn't make it.  Just outside Yuma AZ we had a tire blow out on the RV.  We limped off the Interstate to an exit in Welton AZ where our road service, Coach Net had a truck deliver and mount a tire.  By the time we were back up and running the sun was going down so we spent the night behind the Chevron gas station and continued on to California the next day. 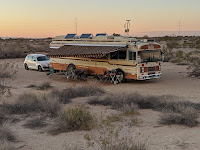 We spent 10 days in Holtville.  It was our first extended boondocking (camping without hookups) of this trip.  It was comfortable and quiet, with daily soaks in the hot springs.  During the first couple of days we drove to the border town of Los Algodones Mexico where we had some dental work done and I got new glasses. 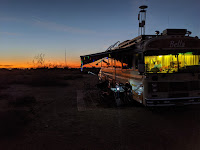 While we were at the hot springs I discovered that the 2 flexible solar panels I had mounted on the storage containers on the roof last year had both failed.  We still have enough solar to charge on a sunny day, but I'm missing the extra capacity.

On December 20th we drove the RV from Holtville to Oceanside CA.  This is a hard drive with a good 40 mile uphill climb over the coastal mountain range then So Cal interstate driving for the rest of the way (5 to 8 lanes each direction - crowded and moving fast).  We are currently at Guajome County Park, finishing our 3 week stay. 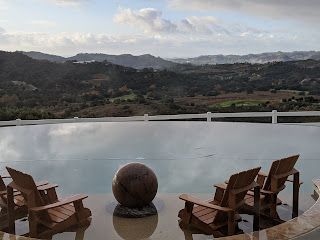 We spent Christmas at Lucie's Sister's house in Temecula CA, it's always nice to spend the holidays with family. 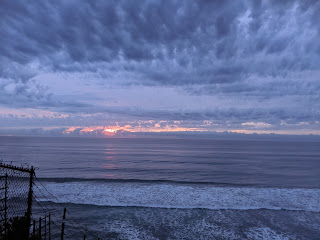 We were going to spend Boxing Day with my sister Joy in Encinitas CA but first Lucie then I came down with a bad head cold that kept us at home through New Years. 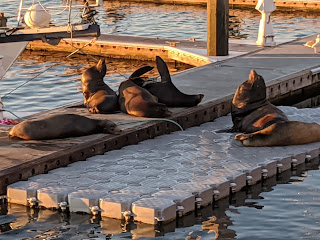 We've now recovered and are enjoying this beautiful part of the country.  I've been working on some of the bus's issues.  I replaced the fittings on the used fuel filter I got in Iowa.  The fittings to the fuel lines the mobile mechanic had welded together to get me back up and running leaked.  I have also been chasing air leaks in an attempt to resolve all the issues with the air system cycling constantly.  I purchased an electric air compressor that was delivered to Joy's.  Our campsite here is paved so I've been able to jack up the bus, block it so it won't fall on me and squirm around under it hunting down air leaks. 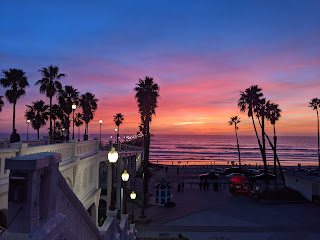 In 2 days Lucie will fly out to spend 3 weeks back east working and visiting Grandchildren.  The following day I will leave Oceanside for Quartzsite AZ where I will attend the Wanderlodge Rally and wait for Lucie to return.