It was almost 10 years ago that I wished Craig Lyndes, a fellow edtech colleague, "Best of Luck" as he headed out on a one year trek with his motorcycle and a small motorhome. Many of Craig's fellow colleagues from around Vermont envied his ability to "leave it all behind" and pursue his goal to take a year to travel the United States. We watched his journey, which he documented faithfully in a travel log, using an old Windows 98 laptop equipped with primitive web design tools and FTP software.  (Craig's travel blog transferred to an ebook (2005) and (2006 - 2007)

Little did I know, that almost ten years later, I would be joining him, in ROUND 2 of a similar journey. Craig and I were married almost 4 years ago. I knew very well that he had wanderlust and didn't say YES when he proposed. Instead, I asked "What would I have to say YES to?" We talked for a few weeks about the differences in our need/desire to travel, and finally he convinced me that what I would be saying yes to was a commitment to a new journey that we would define together.

So for the next few summers I practiced living in an RV. The first few years, I practiced living in a 35 foot trailer with a sunroom add on, parked in a campground on Lake Champlain in Swanton, Vermont. Every fall, we would return to our apartment in Colchester, Vermont for the winter where I enjoyed long baths and large square rooms. 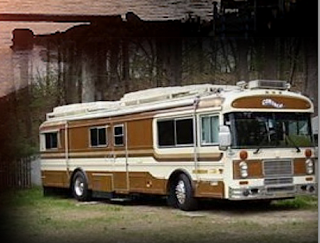 Then, Craig, pursued another dream of his - to own a BlueBird Wanderlodge- and placed a bid on a 1983 bus he spotted for sale on eBay.   For the next few summers, I practiced living in even smaller quarters as we traded in the camper/sunroom for a bus and LL Bean screen room parked in the same  lakeside campground.

This year, we took another big step and gave up our apartment to pursue an 18 month stint in the bus. After some negotiations, we came up with a plan of living in the bus 6 months in Vermont, 6 months on the road, and 6 months back in Vermont. (Grandchildren, were a major factor in this negotiations) The past six months (May - October) have been filled with the adjustments that come from giving up the apartment. (more on that in a future post). But alas the leaves are turning colors, and the snow looms around the corner, so it's time to take mobile living to the next phase. Am I ready? (I, think, so)
Posted by Lucie deLaBruere at 6:22 PM
Email ThisBlogThis!Share to TwitterShare to FacebookShare to Pinterest
Labels: Vermont