The Journey West - New York City to Denver in 7 days

With this post I am playing catch up - I'm writing this two months later on the west coast sitting in a beautiful campsite near San Diego.

We left Liberty Campground heading west through the urban jungle of Northern New Jersey.  Jersey City didn't want to let us go.  We navigated the streets to the Interstate entrance, only to find the on ramp closed for construction.  This lead us on a 5 mile detour through the city to the next exit, auspiciously marked. "No Trucks Allowed".  Once we were on the highway things settled down and we made good time out of New Jersey and into Pennsylvania. 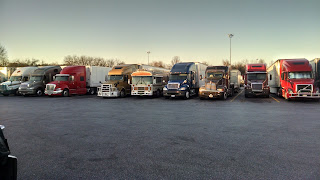 As we were approaching the entrance to the Pennsylvania Turnpike in Harrison we decided to pull into a Flying J truck stop to look up the turnpike tolls on line.  As it turned out the tolls were within the realm of acceptable but we decided to hang out at the Flying J as we had a good parking spot and had learned that these truck stops fill up quickly as dusk approaches. 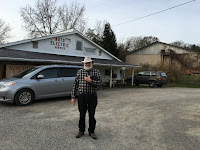 We spent the day driving from Harrison PA to Zanesville Ohio.  Zanesville isn't much of a town, but they did have a Walmart where we arrived near sunset, finding a flat spot out beyond the garden center.  From the time we left Vermont I had been struggling with the RV's alternator.  It went from intermittently spiking the batteries with 50 amps of current to not charging at all.  This was a continuation of the problems that had begun last year as we headed from Florida to Texas, including getting a replacement alternator (which failed within 30 miles of being installed) and getting the original one rebuilt for a small fortune.  The latest chapter in the drama was replacing the voltage regulator while we were parked in Jersey City.  This did not prove to be a solution as the new voltage regulator was now showing the same symptoms.  When we got up Wednesday morning in Zanesville we went searching for another new voltage regulator.  Eventually ending at a little business behind a residence on the outskirts of town where the proprietor had one left (a different brand from the failed 2). 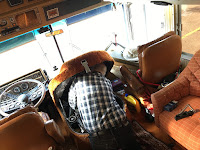 After installing the voltage regulator we continued on our way west, hopeful that our charging problems had been left behind.

We drove from Zanesville Ohio to Terre Haute Indiana.  Things got flatter...  What can I say?  On the plus side the alternator worked the 303 miles we covered! 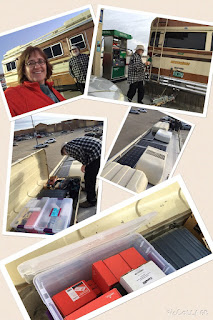 Thursday 11/19/15  We drove from Terre Haute Indiana to Boonsville Missouri where we stayed at a Walmart.  The memorable event of this day was crossing the Mississippi at St Louis.  Lucie raided her Maker supplies we brought with us on the roof of the RV to give her something to do while we traveled.

Friday 11/20/15 we drove from Boonsville MO to Salinas Kansas.  By the time we got to our truck stop for the night the tedium of driving every day was beginning to get to us.

Walking around the truck stop we decided we needed to do something to break up the monotony.  Then we looked out over the flat prairie to the horizon in every direction and wondered...


Saturday 11/21/15  We drove from Selinas Kansas to a truck stop in Oakley Kansas. 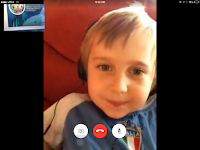 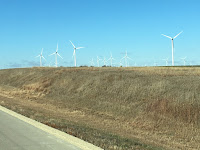 There were windmills and oil rigs along with way.  We even got to video conference with the Grandkids as we drove along.

Once we arrived in Oakley we traveled out a frozen dirt road to view one of the seven wonders of Kansas - the Kansas Monuments.  A chalk formation in the middle of the prairie. 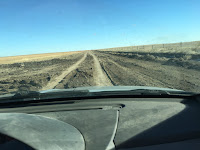 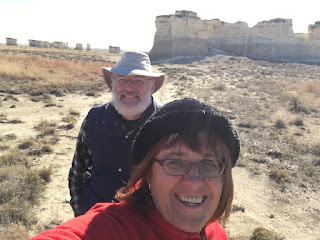 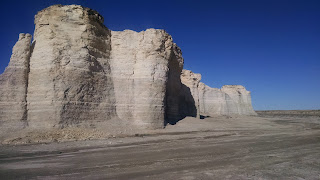 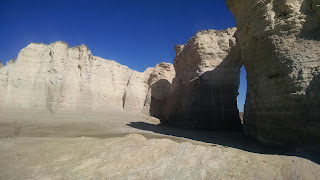 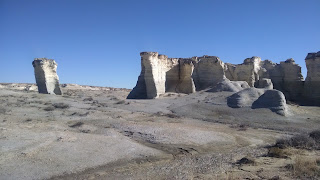 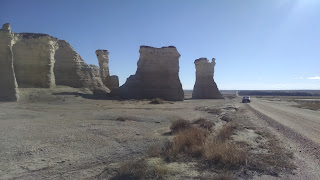 Then we returned to the truck stop where we met with some old friends, the Snows who were heading East to buy a new RV.  We had met them in Cedar Key, Florida two years ago and since then have been following their travels on line.  We had a meal together at the truck stop diner then they continued east.  We spent the night lulled to sleep by the idling diesels parked next to us. 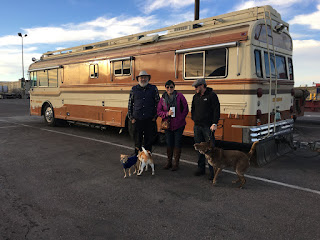 Sunday 11/22/15 It was cold!  We drove from Oakley KS to my son Warren's place in Broomfield Colorado.  We left behind the flat prairie for the Rocky Mountains and we left behind the road for a spot on the street out front of Warren and Allison's new (to them) home.  It is in a delightful neighborhood in this town tucked between Denver and Boulder where we felt right at home, being the 3rd RV parked on their street. 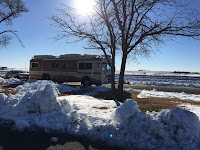 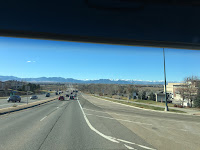 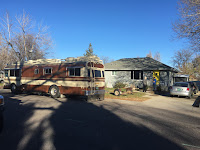 Posted by clyndes at 3:35 PM
Email ThisBlogThis!Share to TwitterShare to FacebookShare to Pinterest