As we travel, Craig and I like to visit and blog about creative spaces and convergences.  While in San Diego we got to visit two different makerspaces (which I'll blog about in more detail later).

During our  first visit  to the Fab Lab,  I noted four female makers on the poster board that featured their Resident Maker Experts -- one seemed a little younger than the rest. 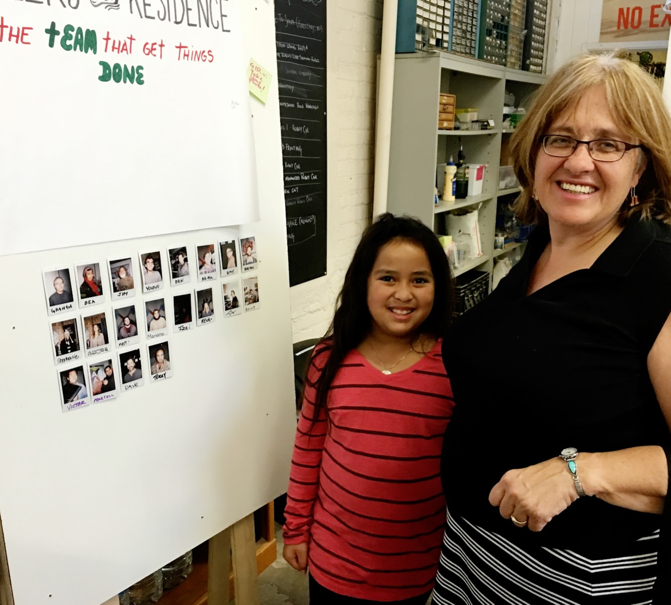 Yesterday  I got to meet this most amazing young maker at the San Diego Fab Lab - 8 year old Isabelle (also known as IZZI).   When I met her, I could see why she was part of the Team That Gets Things Done at the Fab Lab.

Izzi knows her way around a maker space! As you can see in this video, Izzi is totally at home with the space, the tools, and supplies.


When I asked her to show me what she likes to make, she darted towards a back room, stopping  by a box of jumpers, and told me that she was learning to code and then identified a numerical value for each color jumper. 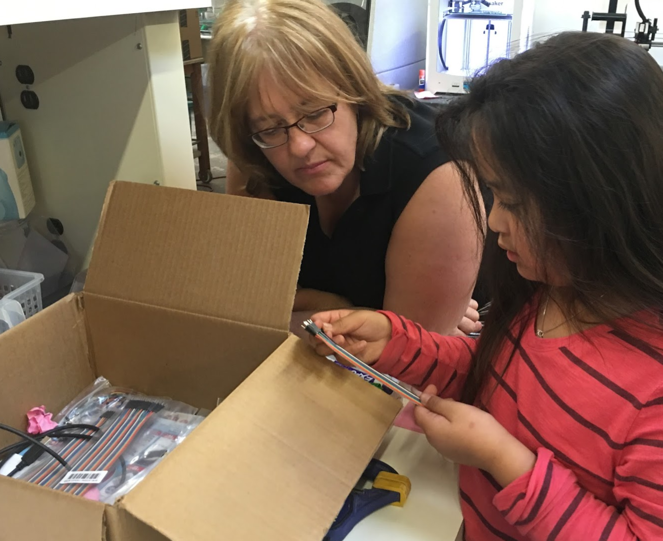 I was immediately curious to know more because, I had never heard anyone assign a numerical value to jumpers before.  But then Izzi proceeded to pull out a set of resistors calculating the value of the resistors by the color bands and then explained that one of her fellow resident makers used the colors on the jumpers to ‘drill her’ about these values. That is totally brilliant!  Izzi has some smart mentors who understand both making and learning! 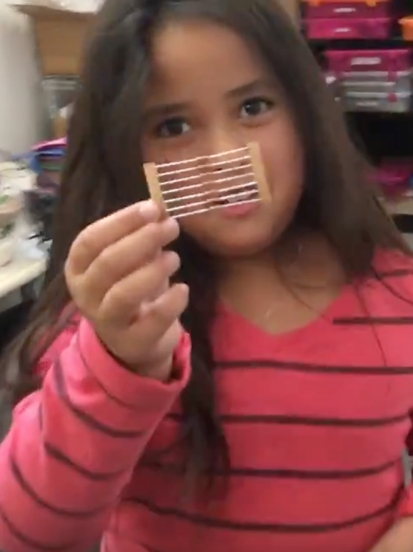 Izzi quickly moved on to what CLEARLY was one of her favorite rooms filled with black and yellow crates that contained lockable plastic pieces, wheels, gears, pulleys, and a remote.  She pulled down a bridge from a high shelf,  rummaged through the drawers until she found a remote and then became entranced with the structure and its moving parts.  It was obvious that the world of mechanical engineering was one that fascinated her. 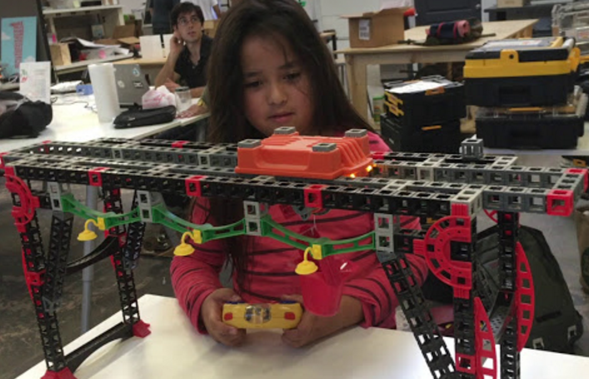 Although I’ve seen a lot of different STEM products, I had yet to encounter the Rokenbok STEM kits and what better way to learn about them than through Izzi’s eyes. This reinforced my beliefs that STEM does not have to be pink or girly  to engage girls, but it does need to have a variety of entry points. The Rokenbok STEM kits quickly went on my list of  products with low threshold, high ceilings, and wide walls which I feel are  key to engaging a more diverse population of tech-savvy creators, makers, innovators, inventors and problem solvers. 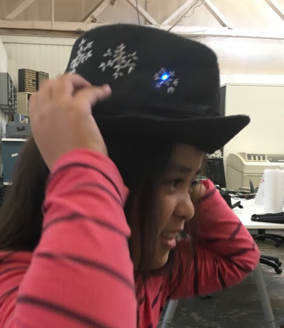 When I  learned that another area that fascinated Izzi at the FabLab was the sewing area. filled with different types of sewing machines for various types of maker projects, I shared with her my interest in using Arduino in eTextile projects and showed her my latest hat project -- a black hat designed to show off an Arduino Bean that controls blue and white LEDs sewed into embroidered snowflakes. She was particularly fascinated with the fact that the project included a sensor that triggered a buzzer to play Star Wars music and started dancing to set off the accelerometer.

I asked her if she’d like to do some making together with some of my supplies.  We broke out some sewable LEDs, a sewable battery holder, conductive thread and quickly created a felt bracelet.   Her  comfort with circuits and ability to problem solve shined as she dashed across the room to find a multimeter when our LEDs failed to light on the first try. 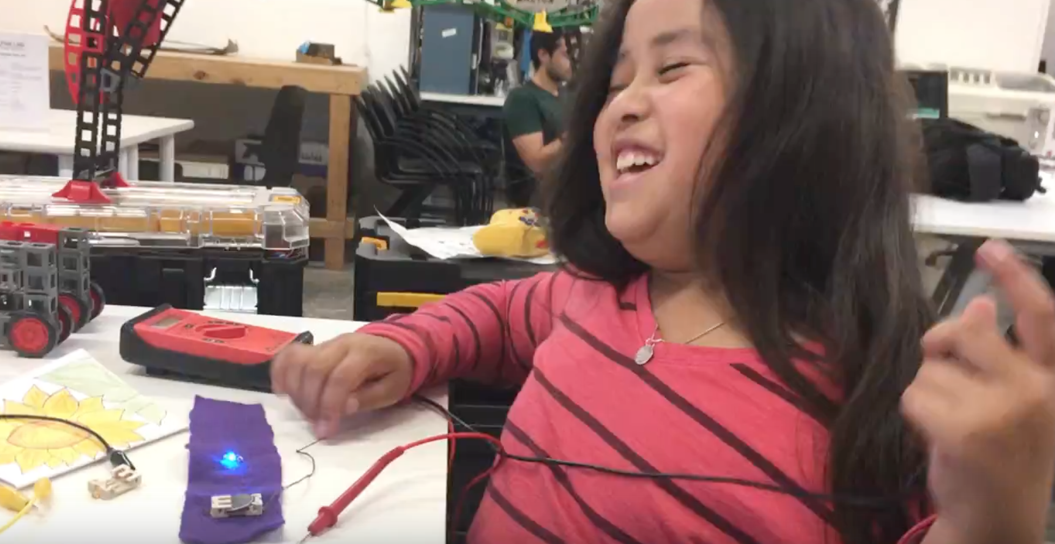 True confession:  My comfort with a multimeter pales compared to Izzi’s.   But her confidence with the tool inspired me to use mine more often until it becomes as second nature as it was for Izzi.  After learning that she had given the mayor of San Diego a soldering lessons, I was tempted to ask her for pointers.    But alas it was time to go and I wanted to leave Izzi with some supplies that would help her move our project to the next steps. 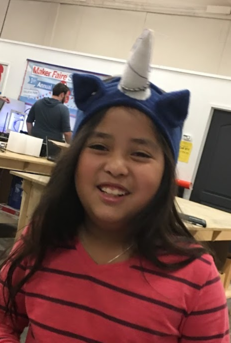 I pulled out a  LilyPad Twinkle, some conductive thread and  some more sewable LEDs to leave with Izzi so  that she could  experience the way microprocessors  can be used  in her next sewing project. Then I showed her how I was using a more powerful microprocessor called the LilyPad Arduino to control some multi-colored neopixels on a unicorn headband project I was working on.

I would so love to come back and show Izzi to code a future Arduino project.  But my guess, is that Izzi is not going to need me to learn to code.  Izzi is fortunate enough to be surrounded with fabulous mentors from the FAB LAB who have taken her under their wing -- including her mom (Joy) who serves as  Community Relations Manager for the FabLab - San Diego. 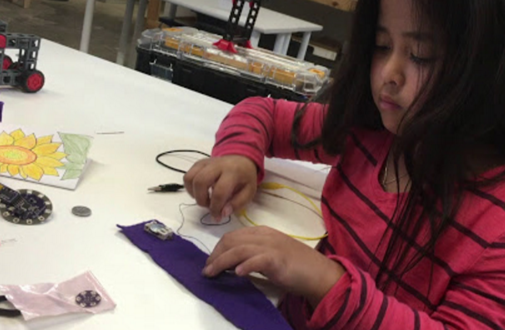 The joy I was feeling while hanging out and making with Izzi was slightly dampened when hearing that Izzi school environment doesn’t seem to provide the opportunities for Izzi’s passion to shine.  The strong confident voice I heard from this young lady is not part of the Izzi you might see at school.

It’s sad that more kids don’t get to bloom the way Izzi obviously has by being surrounded in a rich environment for learning like the FabLab.

It’s sad that students with passions for creating and making often don’t find a place to use that passion as part of everyday learning.

Thankfully more schools are integrating more STEM/STEAM opportunities for students, and many educators I  work with are building their own maker spaces in their schools.

Thankfully more and more products like the Rokenbok STEM kits are being created with thoughtful attention to engaging a diverse group of students to “think like engineers gives them the skills and confidence to change the world.”

Thankfully many places like the FabLab are offering outreach opportunities to help our schools create tomorrow’s innovators.

I can’t wait to see what path Izzi will follow as she continues to learn -- but something tells me engineering is somewhere in her future. 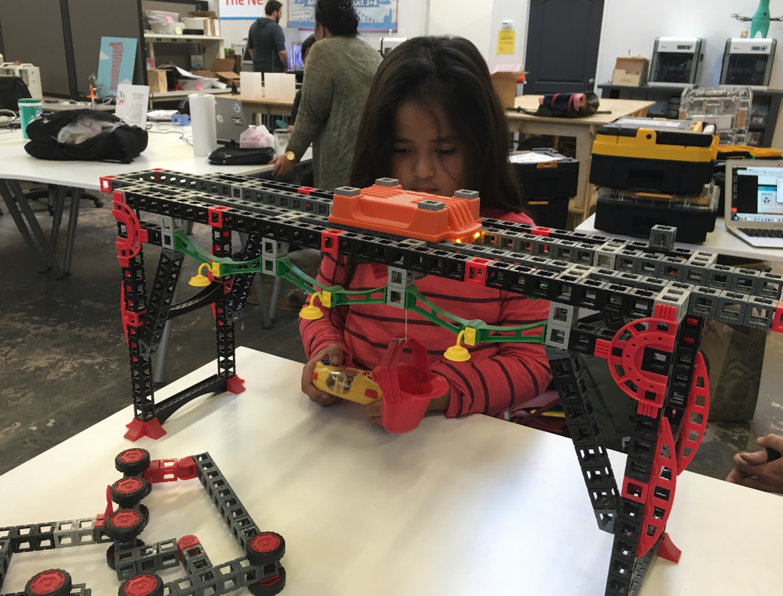