Our first stop on this 2015-2016  trip (besides the overnight stay at  Saratoga Casino in NY)  was  the greater New York City area.  As a birthday present to me, Craig made reservations at Liberty Harbor RV Park in Jersey City    He took on the challenge of navigating the bus through the Jersey Turnpike and other congested highways to get us there and shelled out the almost $100 a night fee for a spot in this RV Park(ing lot). We had heard about this campground before with its $$$ price-tag, but when you think of what it offered — proximity to our kids,  a 15 minute $2.50 train ride to Manhattan,  it turned out to be a very affordable place to spend the week.  They even gave us a 7th night for free. 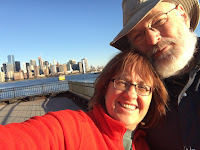 It was a fabulous place to camp, since it meant that we got to see family for a week and that I would spend my birthday - in Carnegie Hall sitting next to my son as the New York Pops played the world premiere of his arrangements. 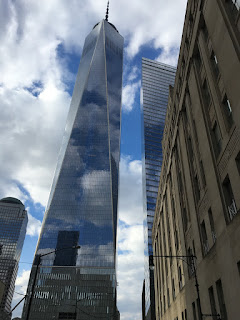 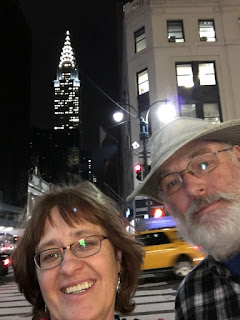 It also gave us a chance to look around and  up at this amazing city.  What a wonderful gift!

Navigating the city streets, the subway station, and taking in sites like the World Trade Center Memorial brought back lots of memories of the 18 months I lived and worked in New York. 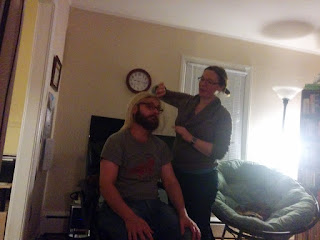 Upon our arrival, we freshened up a bit and headed to Keyport, New Jersey to have dinner with Craig’s daughter, Maggie, and her husband, Peter.  It was Maggie’s last free night before she went into ‘tech’  for the Two Rivers Theater production of “A Funny Thing Happened on the Way to the Forum”… so we jumped at the chance to take Peter and Maggie to dinner.  Except for the white knuckle drive from Jersey City to Central Jersey through rush hour, the evening was delightful. Maggie and Peter have been in this cute little house for almost a year now -- and our grand-cat Wallie almost came out of hiding to meet us. Maggie even gave us a preview of her new skill - making wigs!.    Thankfully, later in the week,  we were able to make our way back to Keyport to catch the show and take the Peter and Maggie out to dinner one more time before we left.  It was fun to watch the production thinking of Maggie's hand at at the costume changes. 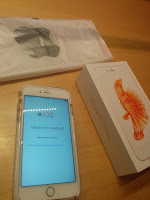 We took the next day to recoup from the busy pace of the past few weeks and to put in some work time.   On Wednesday, we took the path train  to the infamous Grand Central Station Apple store where I bought myself an early birthday present - the new iPhone 6S Plus. After two+ years learning the Android Operating system on my Nexus 5,  I was ready to move back to iOS  so that I could better integrate in the lives of my grandchildren and family while on the road. (FaceTime wins over Google Hangout when the rest of the family has iPhones and your grandchildren have an iPod touch.) I had a real hard time justifying the cost, but the family connection through FaceTime, the great camera, and a birthday splurge helped me move past the guilt of spending that much $$$ on a phone. 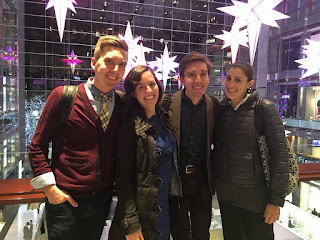 With a new phone in hand, we grabbed the R train to Brooklyn  to see my son, Adam, and wife, Giuliana, and admire their new coop.   Your kids feel so grown up when they get a mortgage.   Glad to see them doing well!  We camped out at their new place and then grabbed the train back to Jersey City,  where my other son, Matt, and his lady, Molly, met us for lunch.  Sooo soo cool to have so many of our kids so close to our Bluebird.

Although many campgrounds boast the tranquility of nature, this one can boast views of the city that never sleeps and a close up and personal look of the absolutely amazing transportation system that our NY and its surrounding areas has built to move millions of people and the goods they desire around.  When you think of this feat - its mind boggling. 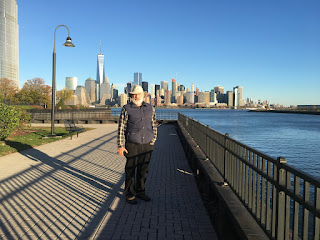 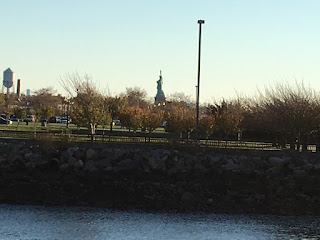 And of course.. there’s the issue of my most incredible birthday, which deserves its own post.

Posted by Lucie deLaBruere at 5:38 PM
Email ThisBlogThis!Share to TwitterShare to FacebookShare to Pinterest