This semester I am enrolled in  a graduate class - Introduction to Physical Computing  from Marlboro College Gradaute and Professional studies.  Our assignment this week was to complete the cycle from design to printing of a 3D object.

I already knew that I’m not very 3D spatial by nature, so I was not surprised to be challenged by this assignment.  I had tried Sketchup a few times and  always amazed at what I have seen 5th graders do with this professional level tool.  But then again I can’t hold a candle to a 5th grader at any video game that requires 3D movement.

Craig suggested that a dice might be a good entry point for me.  Sounded good, but  I wanted something a little more creative, than the numbers 1,2,3,4,5,6 on a cube, so I came up with the idea of six inspiring words on each side of my cube.  (imagine, invent, innovate, create, make, learn).

Now inspired, I was ready to tackle the task.

Since I am on a personal inquiry about  the role of mobile tools in the “maker movement” I thought I’d give this a try using some of the AutoDesk iOS Creativity apps that I had once downloaded on my iPad.

Although these are amazing apps,  I was not inspired by the parts available on the 123D Design iOS app.  They all felt so mechanical and robotic, and there did not appear to be any way to add text to my cube, so I proceeded to the online version of 123D design using my computer and found that it had a feature called SmartText that allowed for text extrusion.   By sticking with a cloud based product I felt like I was still within the realm of mobile since inspired students could use this tool on ANY computer that had internet access and would not have to download software. 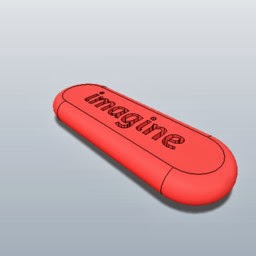 Unfortunately  my lack of experience did me in.  Although I was successful in getting one of the words etched into one side of an object by pushing it down into the object and using the void feature, I eventually became frustrated at my lack of understanding of how to join objects on different planes as I tried to work with the other sides.  There was so much more to learn to get this right and every piece of new learning was taking so long.  Thus  I decided it was better to complete the ‘cycle” from design to print with something simpler than to keep building my skills in using the design software.    So I settled for a small object that had the word “imagine” etched in.  I could always come back and build my design skills later.

On to the next step in in the process.  After exploring 2  popular sites for getting objects printed on a a 3D printer (Sculpteo and Shapeway)  I learned that as long as I could get my design in a format called STL I could upload it to those sites and order my object in a variety of colors and textures. I was even more impressed when I noticed that 123D Design (and probably many other pieces of software)  had a “Send to 3D printer” feature what connected with one or both of these online printing services. 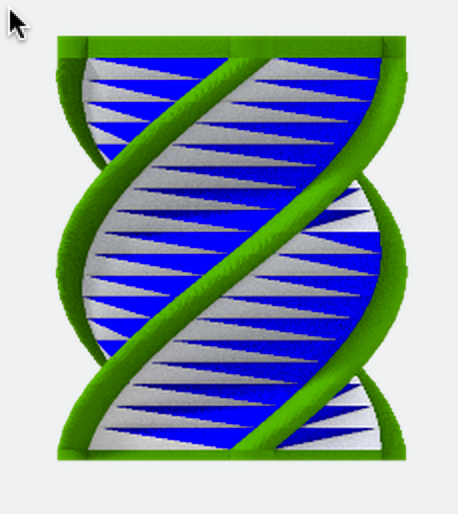 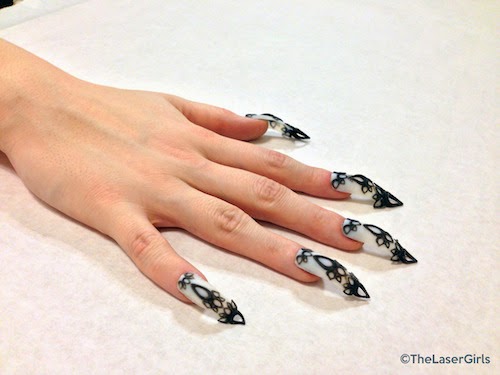 Who ever thought you could print such creative objects such as this spiral "pot"  or custom designed fingernails.

However I was quite surprised at how small my object had to be to stay under the $10 cap we were trying to work with. I reduced the size of my objects to about 3 cm long. 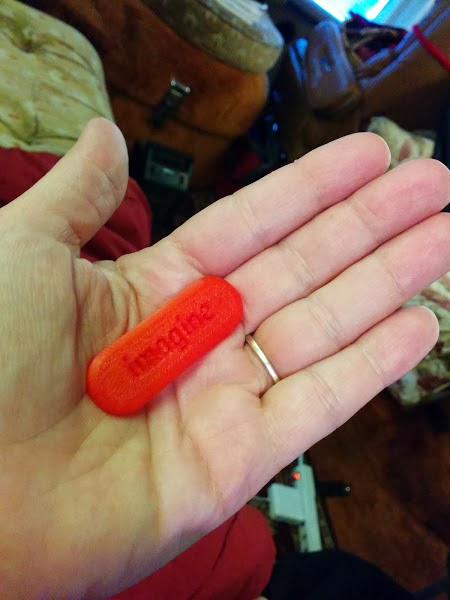 Unfortunately the turnaround time for delivery was a little too much for my mobile lifestyle and even with expedited shipping it would arrive the day after we hit the road again.  However this constraint led me to explore makeXYZ.com where people list their 3D printers locations and offer to 3D printing
services.  I found 2 within a 20 minute drive from our campground and started a conversation with a young man named Johnny Harris in Delray.  He quoted me $10  or $15 depending on the resolution plus a small service feel.  I opted for the higher resolution and made arrangements to pick up my 3D print in a public place (hotel lobby in Delray).

I now own a  $17 red piece of plastic (3 cm long) with the word “imagine” etched in.  But heck, the experience was totally worth the cost.

The best part of the experience was hearing Johnny’s story. He is self taught with no formal training. He  bought the 3D printer because he had an invention he wanted to make and didn’t have a way to get  a prototype.  The invention ( a vegetable peeler that peeled from all sides) is now in the patent process and this young man is now building a new fancier 3 D printer. We were quite impressed with him.

So much so that we commissioned him to model a part for our bus window screens and print 10 of them.  The $100 feel might seem a little more than we wanted to pay for 10 small plastic pieces, but we both liked the idea of supporting Johnny’s entrepreneurial journey - and if the material is strong enough to do the job of holding our screens in place, then perhaps Johnny will have lots of new customers from the Wanderlodge bus  owners around the country who can no longer get this part.

It was our first time in Delray and we were quite taken by the creative economy in Delray.  We ended up walking around an Arts Garage  (seemed like an incubator building for artistic industry), a puppet theater, and a few galleries.  We ended up purchasing some fancy olive oils and vinegars and went in search of crusty breads. Lots of dessert bakeries, but no crusty bread until we hit a health food store and walked out with two different types of gluten free bread. The search for bread inspired us to stay for the evening.  We did happy hour at an Oyster bar and dinner at a Mexican place that had a large choice of tequilas , really fresh local ingredients, and wonderful service.

Part of the street was closed off for a well attended fashion show featuring local designers and shops, which we watched for a while as we walked around town.  We finished up the evening lingering over decaf and conversation about how my 3D assignment turned into an unexpected but very fun Friday night date.

Posted by Lucie deLaBruere at 6:45 AM
Email ThisBlogThis!Share to TwitterShare to FacebookShare to Pinterest
Labels: 3D printing, learning