Lucie leftTurkey Swamp in New Jersey for Brooklyn to spend time with the grandchildren on Monday October 28. That left me a few days in New Jersey to hang out with my daughter Maggie, Peter and Skeeter the granddog. On October 31st (Halloween) I emptied and filled the tanks on the Wanderlodge and headed West. 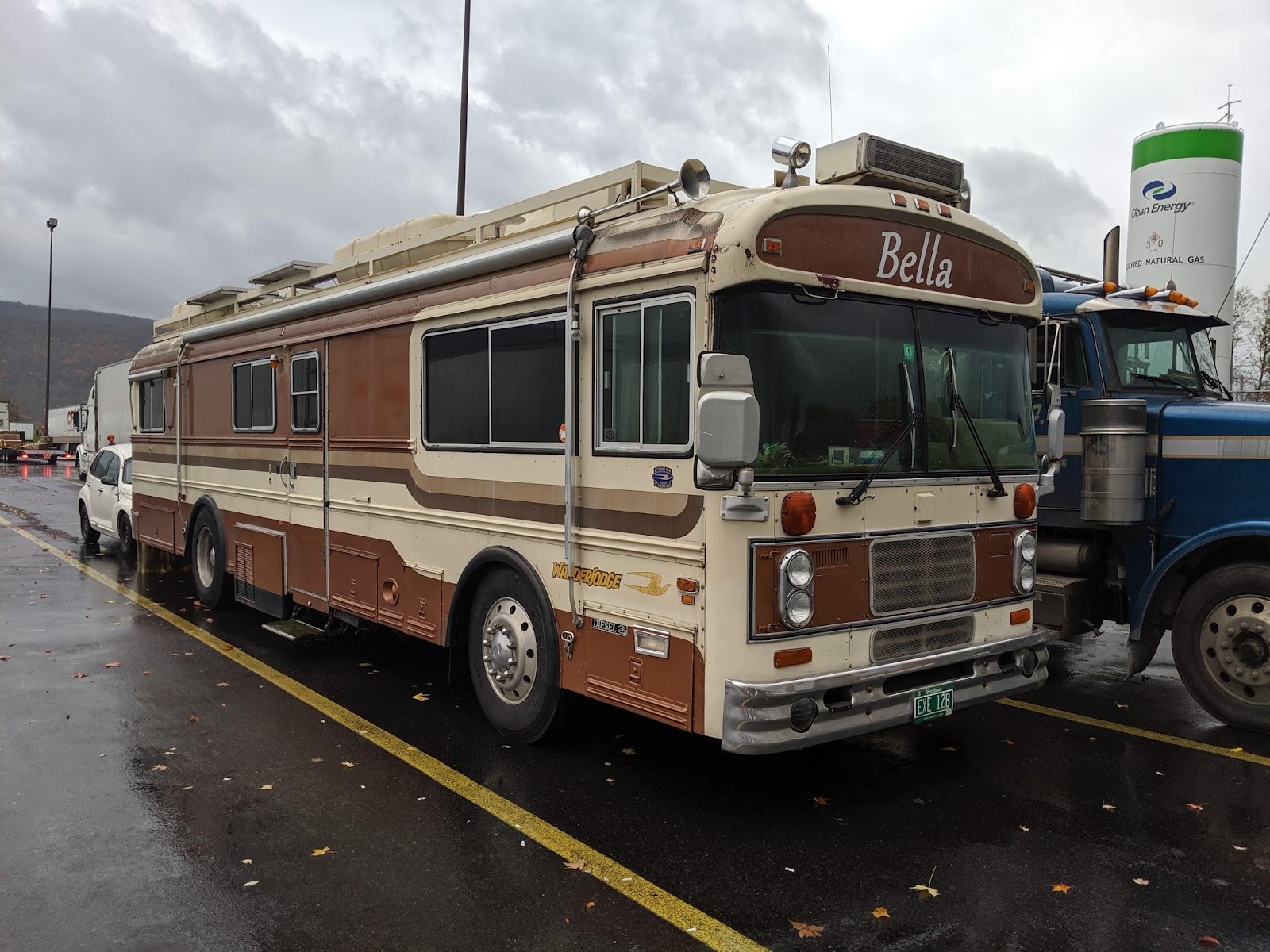 I stopped after about 300 miles at a Flying J truck stop near Lamar Penn. Throughout the day I had become aware that the air system on the bus was cycling much faster than it had in the past. Every 2.5 minutes the compressor would come on and build up air pressure to 125 lbs, then the air dryer would spit and 2.5 minutes later it would repeat. Normally it would take over 10 minutes for one of these cycles. I started doing research and reaching out to the Wanderlodge community online. It was a rainy day and I was glad to have made it to a suitable resting place for the night.

The next day, Friday, I traveled another 300 plus miles to Castella Ohio. I was taking a more northerly route, I80, because I had made an appointment at HWH, the company that made the leveling jacks on the RV, in Iowa to have a broken jack repaired. I stayed at an Interstate rest area in Ohio. I80 is a toll road in Ohio, so I figured I could at least get a nights rest out of the toll. In the morning I noticed a little puddle of diesel under the Racor fuel filter on the Wanderlodge.

Saturday I proceeded to a Flying J truck stop in Lasalle IL. As evening approached I called 3 Walmarts along my route that were marked as OK for RVs to park overnight. All 3 said they no longer allowed RV parking. 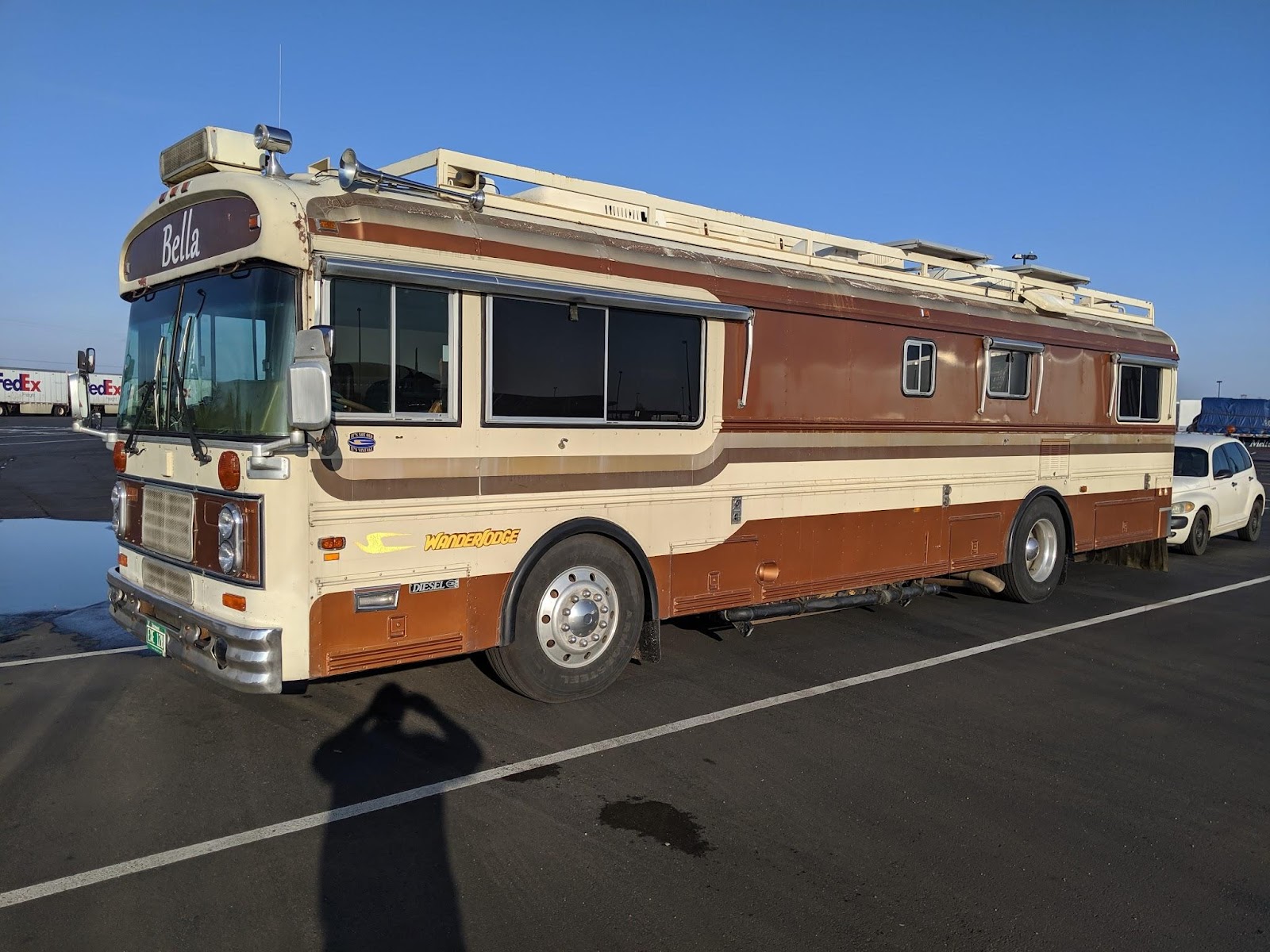 There was snow on the ground here and it was quite cold. I filled the propane tank on Bella in the morning.

Sunday I traveled less than 200 miles to the HWH factory in Moscow Iowa. It was below freezing with snow on the ground. I parked in a parking lot in preparation for my 7AM appointment to get the leveling jack fixed.

I ended up spending four days at HWH. What started out as repairing one leveling jack ended up having another jack replaced and rebuilding the control manifold being added. I figured that I might as well get the system working correctly while I was there. One of the things that added to the time it took is they assigned some new people to work on Bella. There were always experienced people supervising and I was not charged anywhere near the number of hours they actually worked, but it did end up taking quite a long time.
The first night I parked outside where HWH provides electrical hookups for their customers. 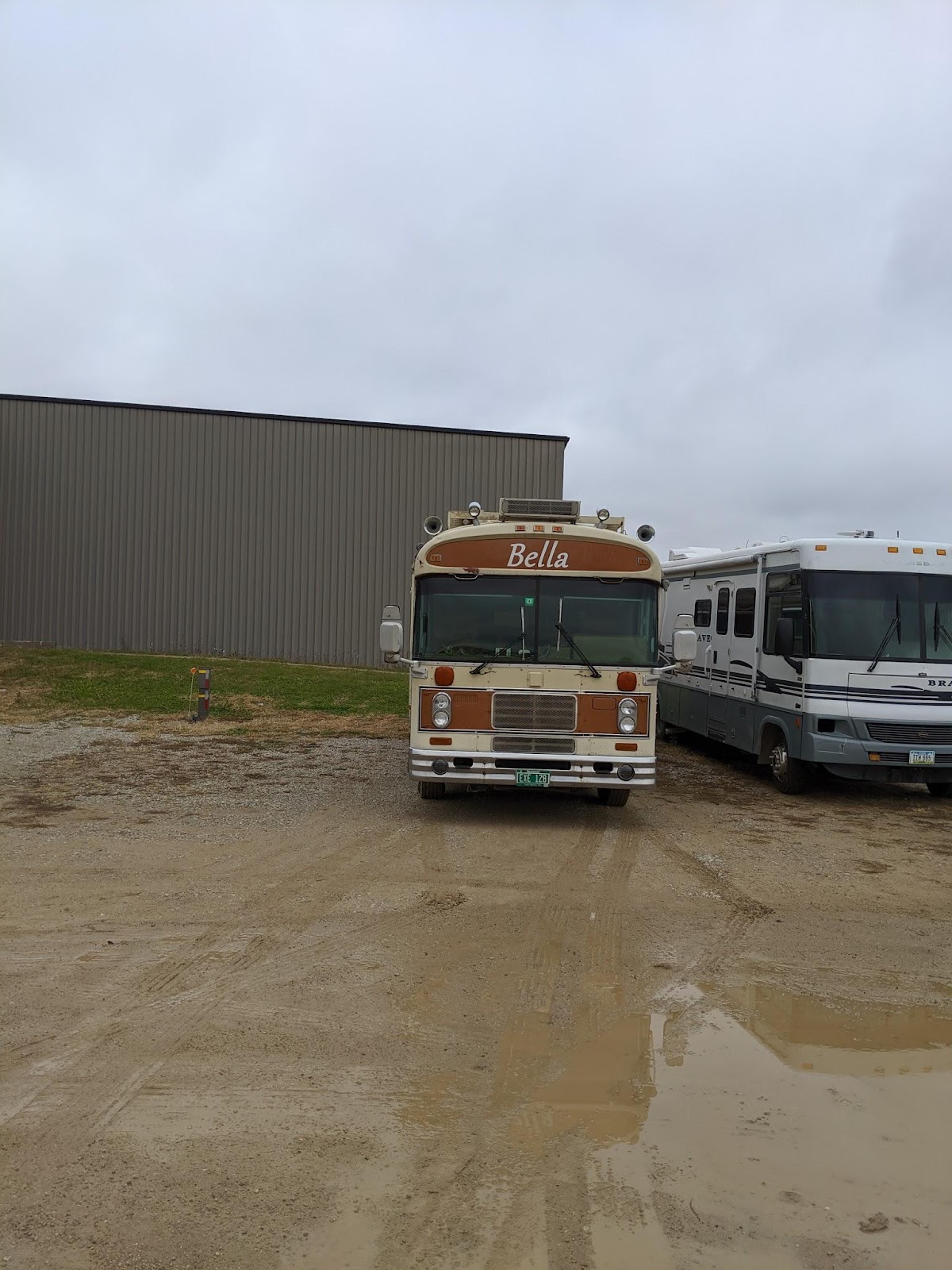 After that they let me stay inside, which was a good thing because the temperatures plummeted. 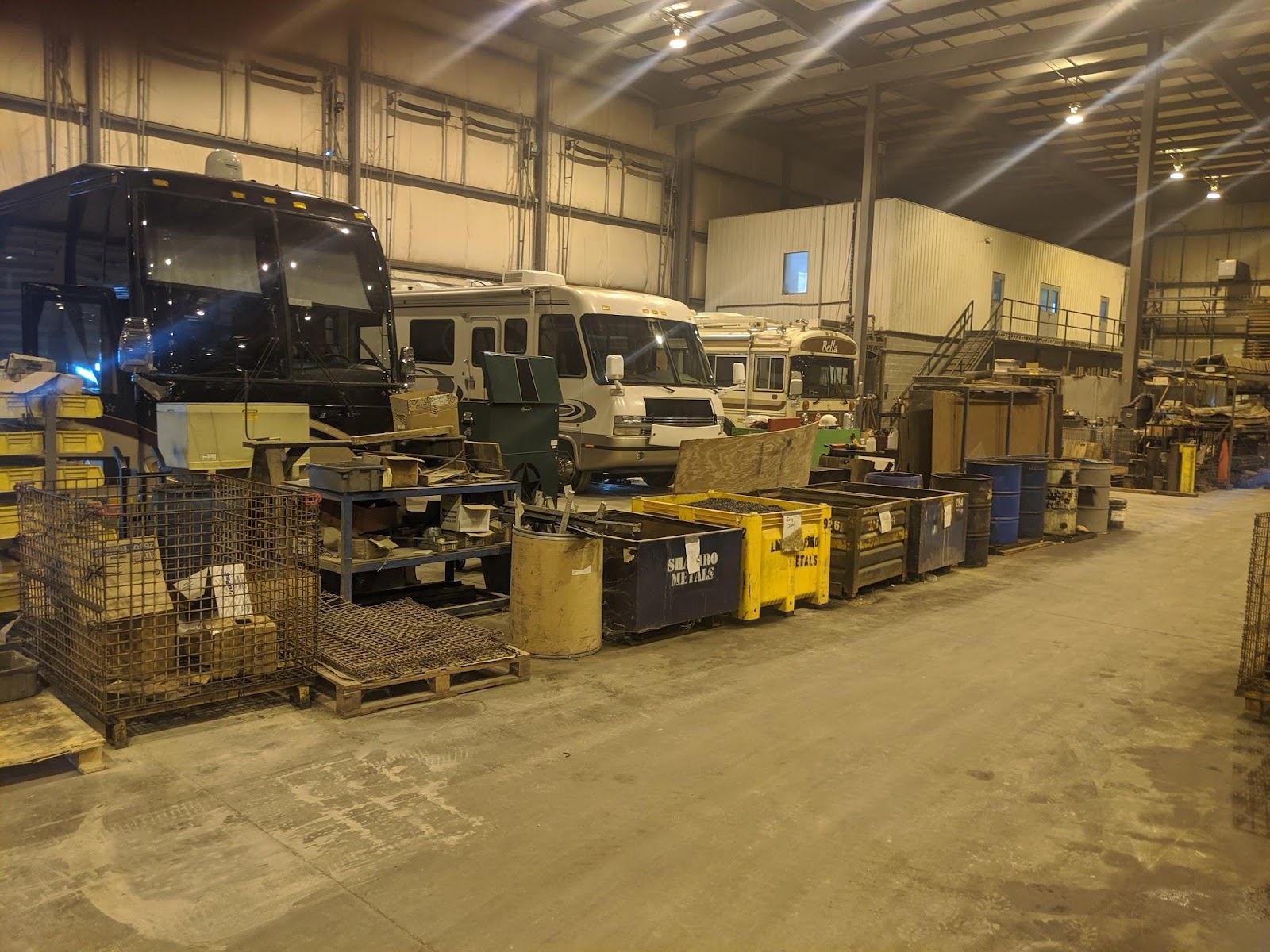 Being on the inside the diesel leak from the Racor fuel filter became very obvious. I tried to tighten up the valve that is used to drain water from the filter and ended up making the leak worse. By the last day it was leaking a quart of fuel a day. 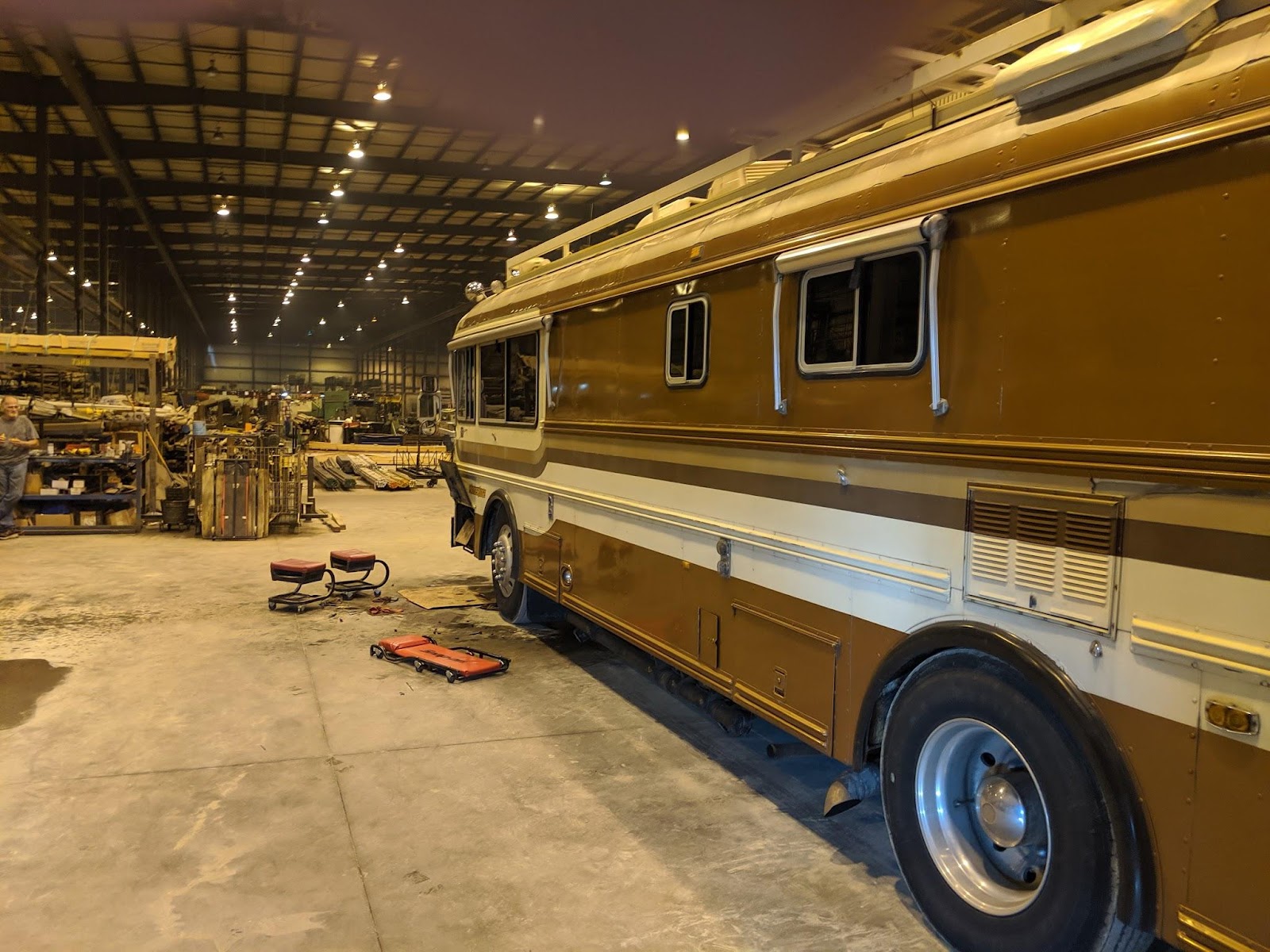 By the last day the leak was so bad the Wanderlodge would not start. There was air where there should be fuel in the injector pump. I ended up calling a mobile mechanic who had a spare, used, fuel filter that he sold me and then we bled the air out of the engine. Once it was running the HWH people could finish up their work. After paying they allowed me to spend another night inside,which was nice as it was 15 degrees Friday November 8th when I headed out for Topeka KS. 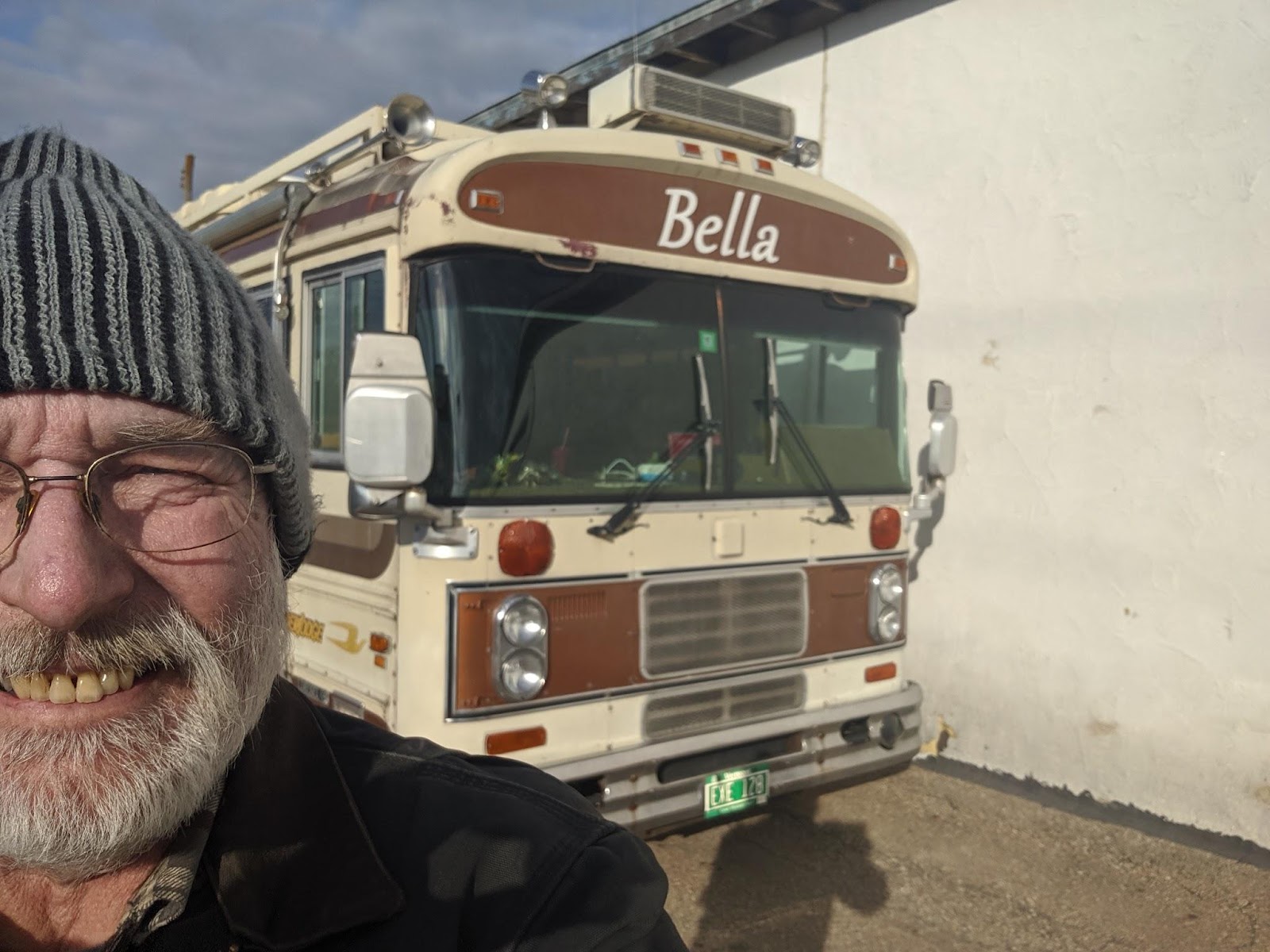 It was 400 miles to Topeka where I was welcomed by Tim, who had helped us last year when the water pump broke and stranded us. He has a 30 Amp hookup at his business where I settled in for 3 days. He very generously helped me replace the air dryer on Bella which at that time was the prime suspect for what was causing problems with the air system. The one on the RV was so old that parts were not available and one of the truck dealerships in Topeka had a more modern replacement. Tim fabricated a mount and he and I worked under the bus, in the snow in 20 degree weather, replacing the air dryer. 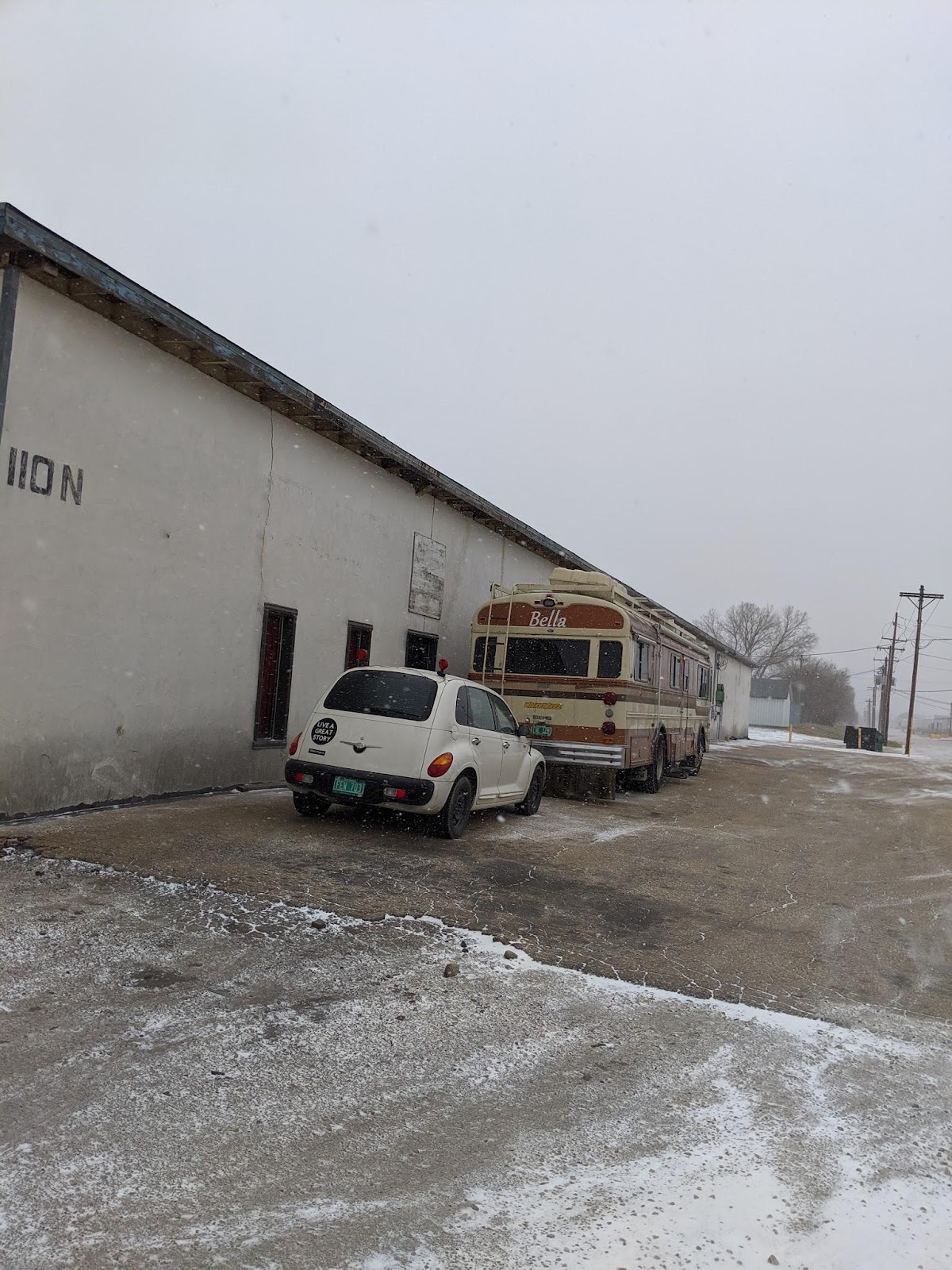 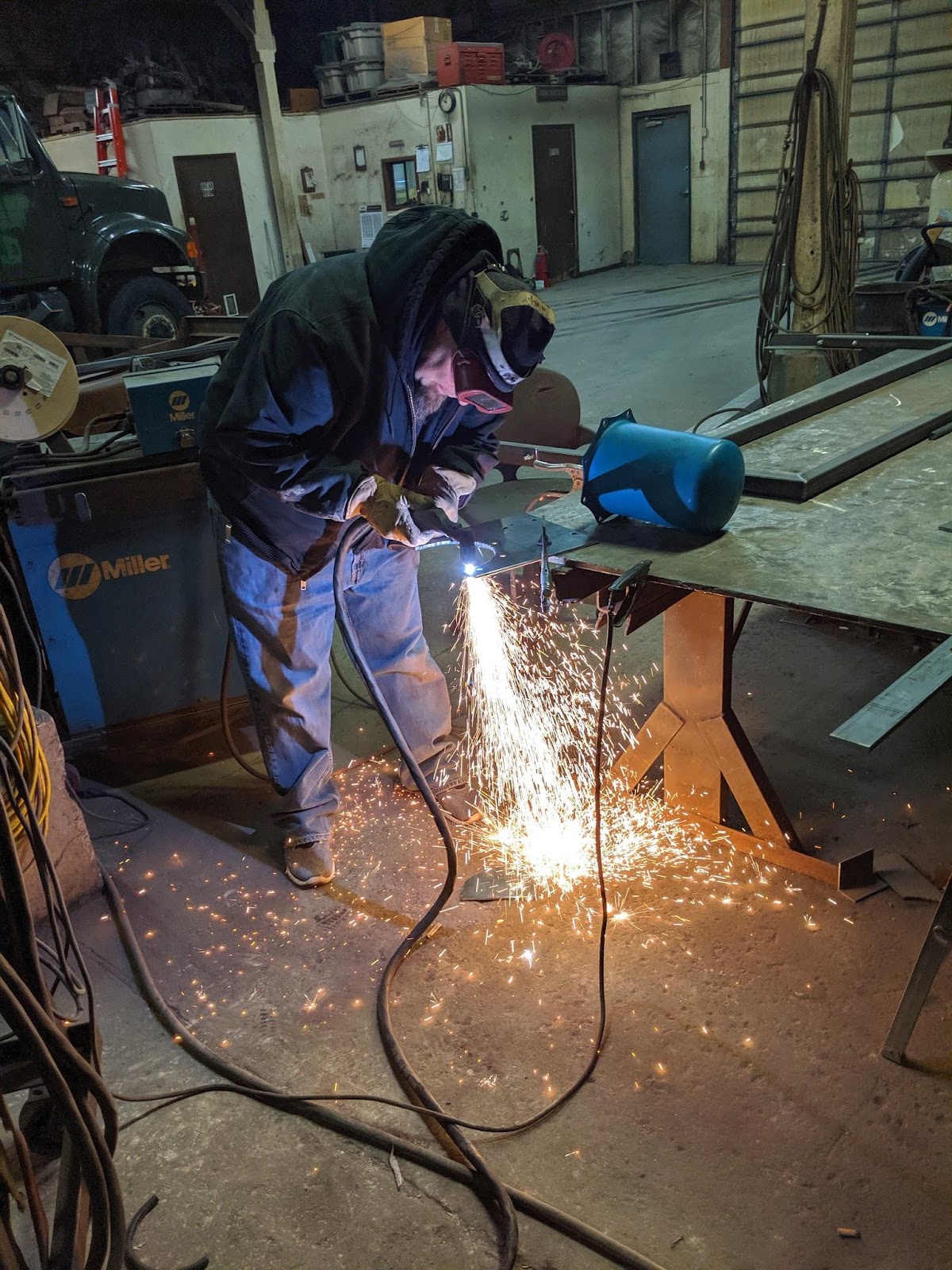 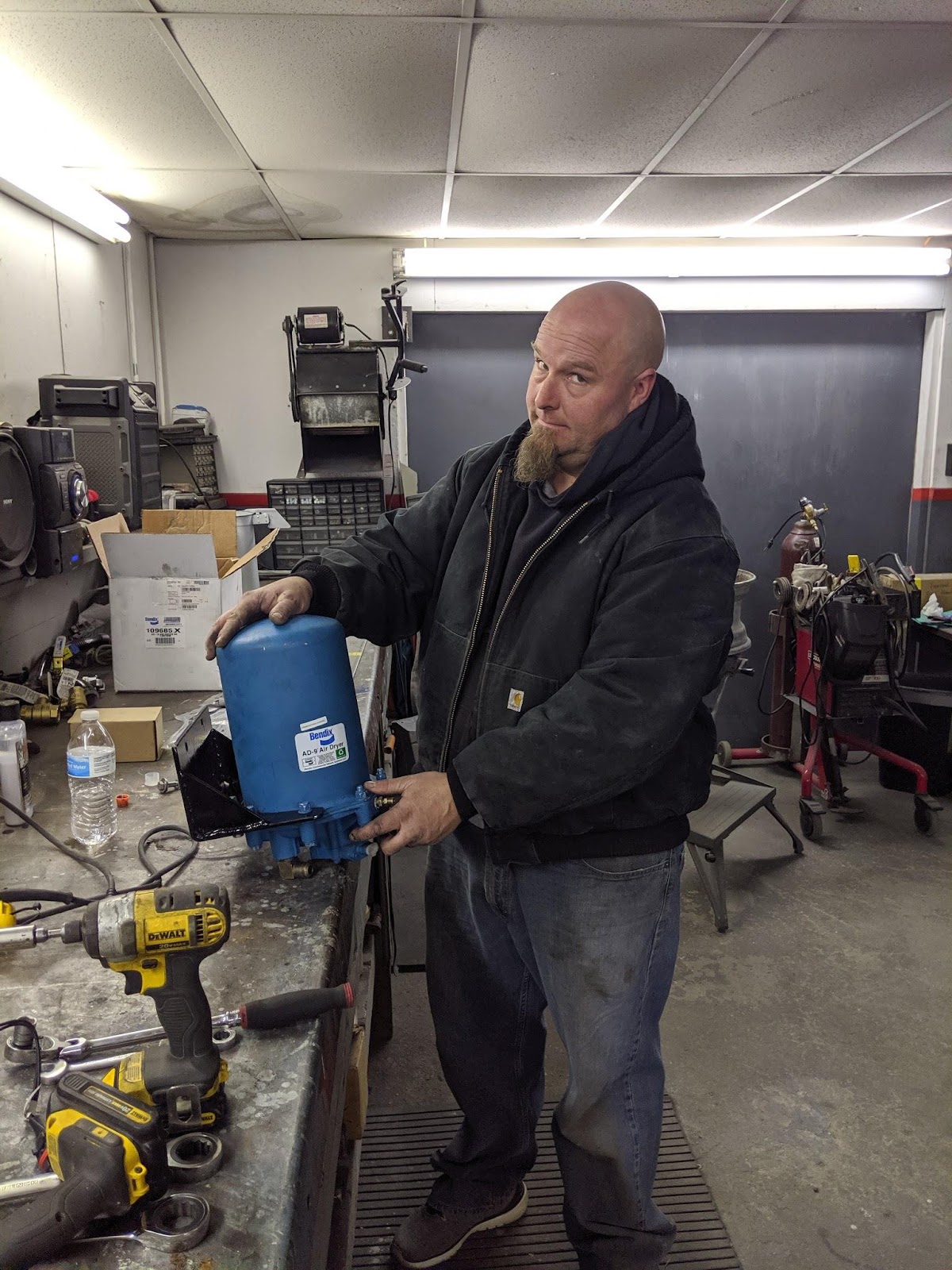 I am eternally grateful to Tim who so generously shares his master mechanic skills with fellow Wanderlodge owners. He refused payment, but did except small remuneration in maple syrup, which he has developed a taste for.
On Tuesday November 12th I left Topeka in 8 degree weather. I had not frozen up any pipes, but I’m pretty sure my holding tanks were solid blocks of ice. I drove over 400 miles to Sebert Colorado, where it was above freezing and I got a campsite with full hookups to empty and fill the tanks in preparation for stealth camping on the street at my son Warren and Allison's place. 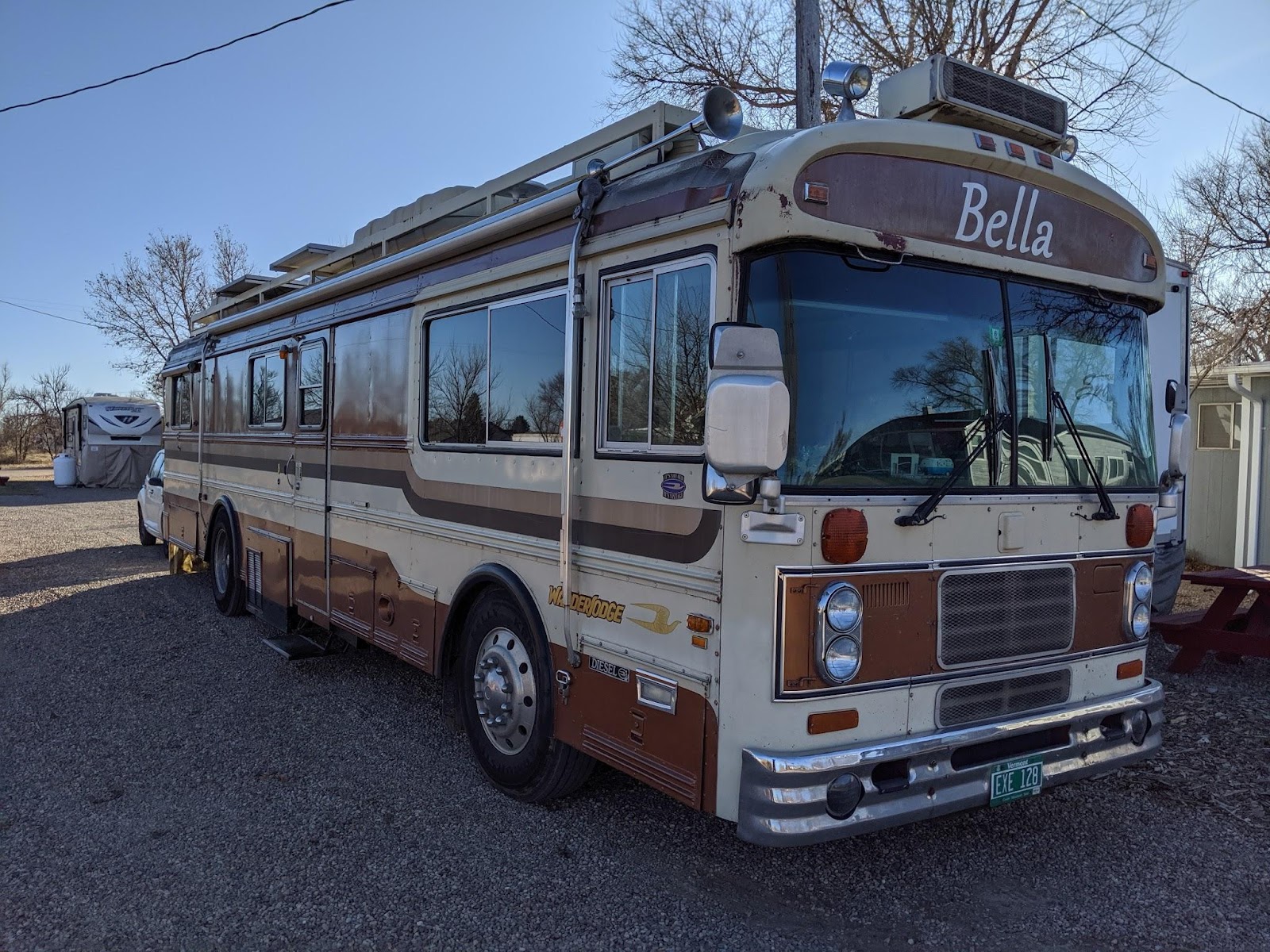 On Wednesday I drove the 125 miles to Broomfield CO where we are now. It was wonderful to be able to spend time with my Son and his Wife and for the beginning of the stay, the weather was sunny and above freezing. Warren has a 30 amp electrical connection wired up to his house that makes it welcoming to stay here. 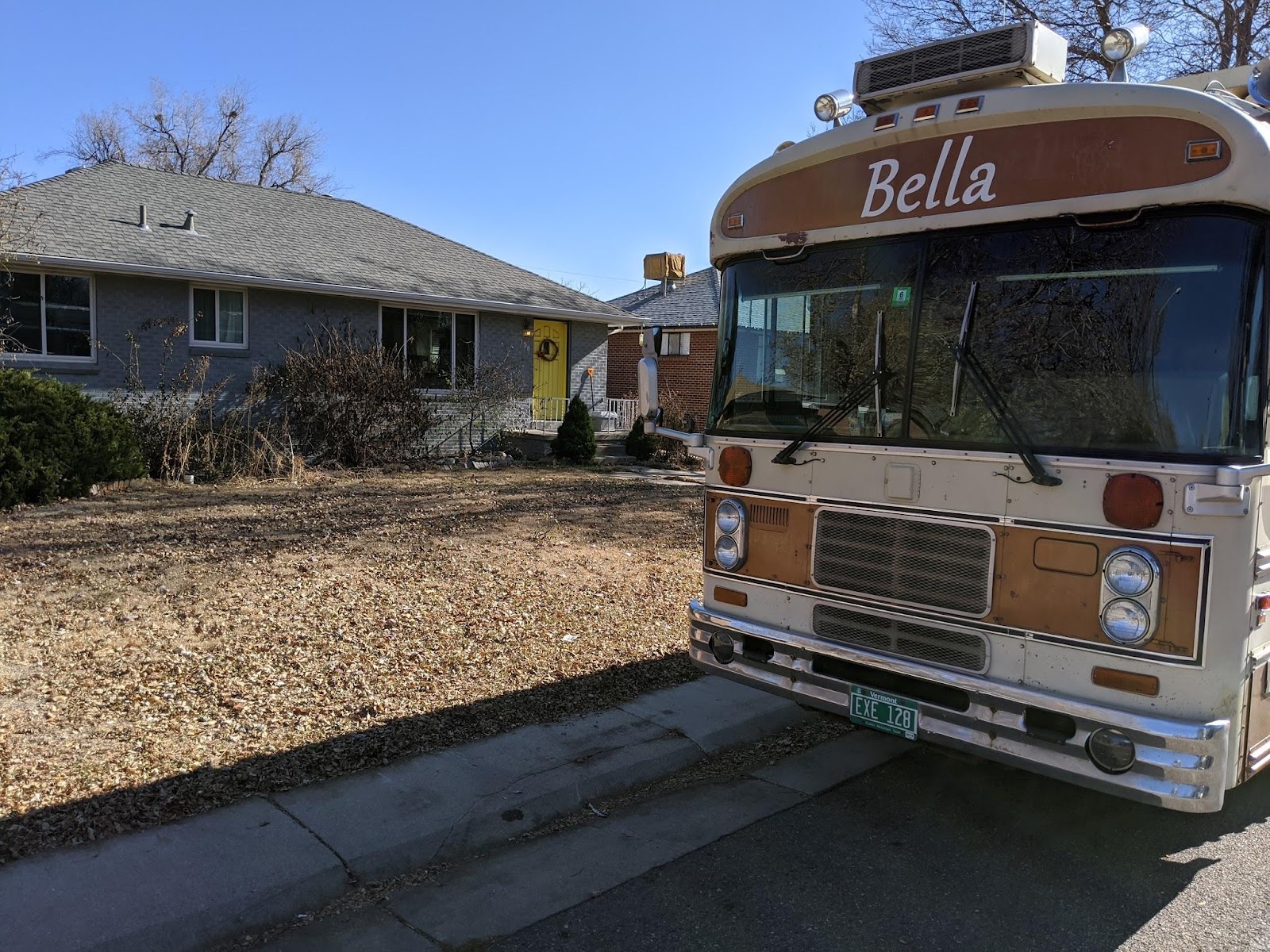 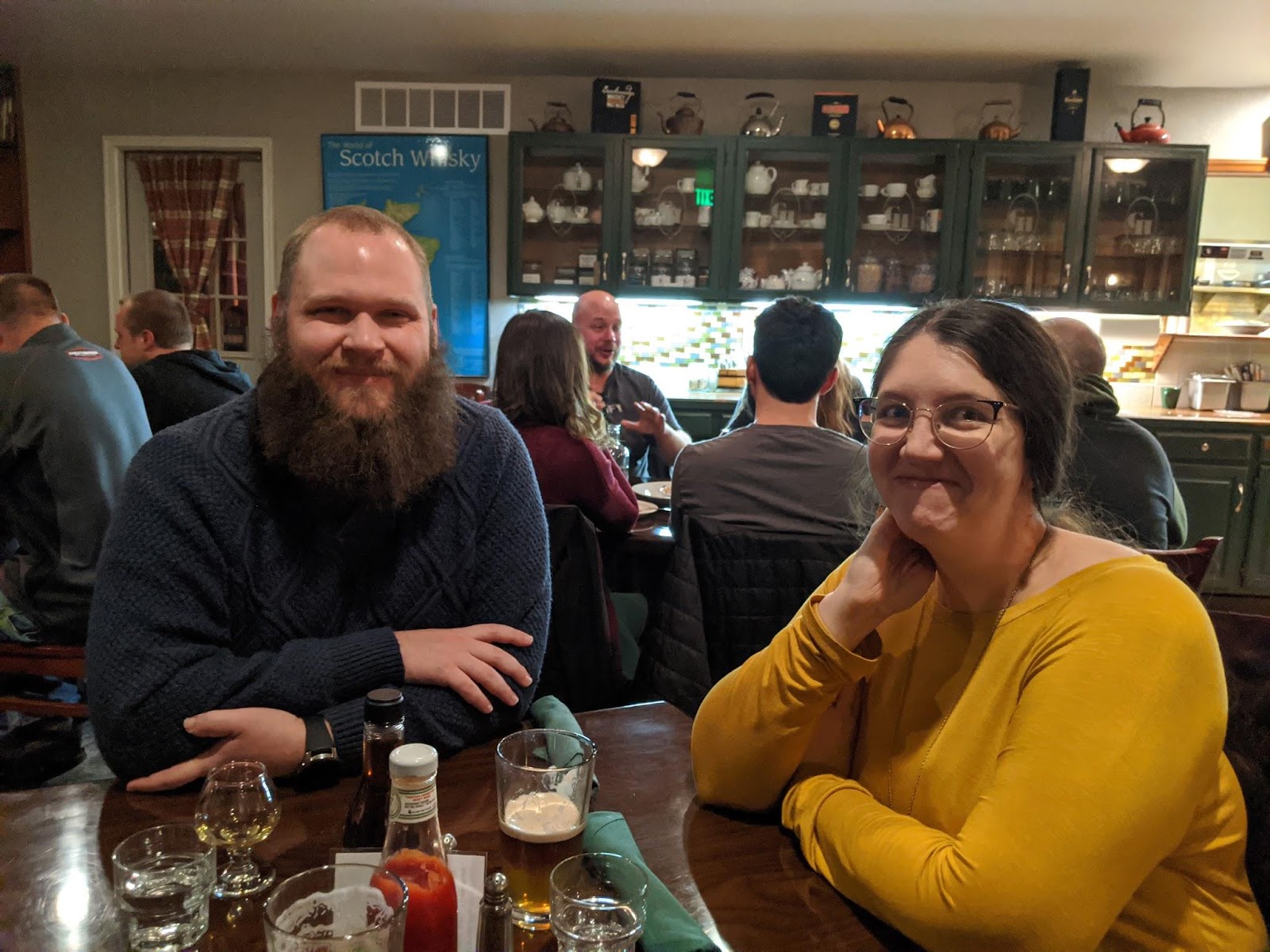 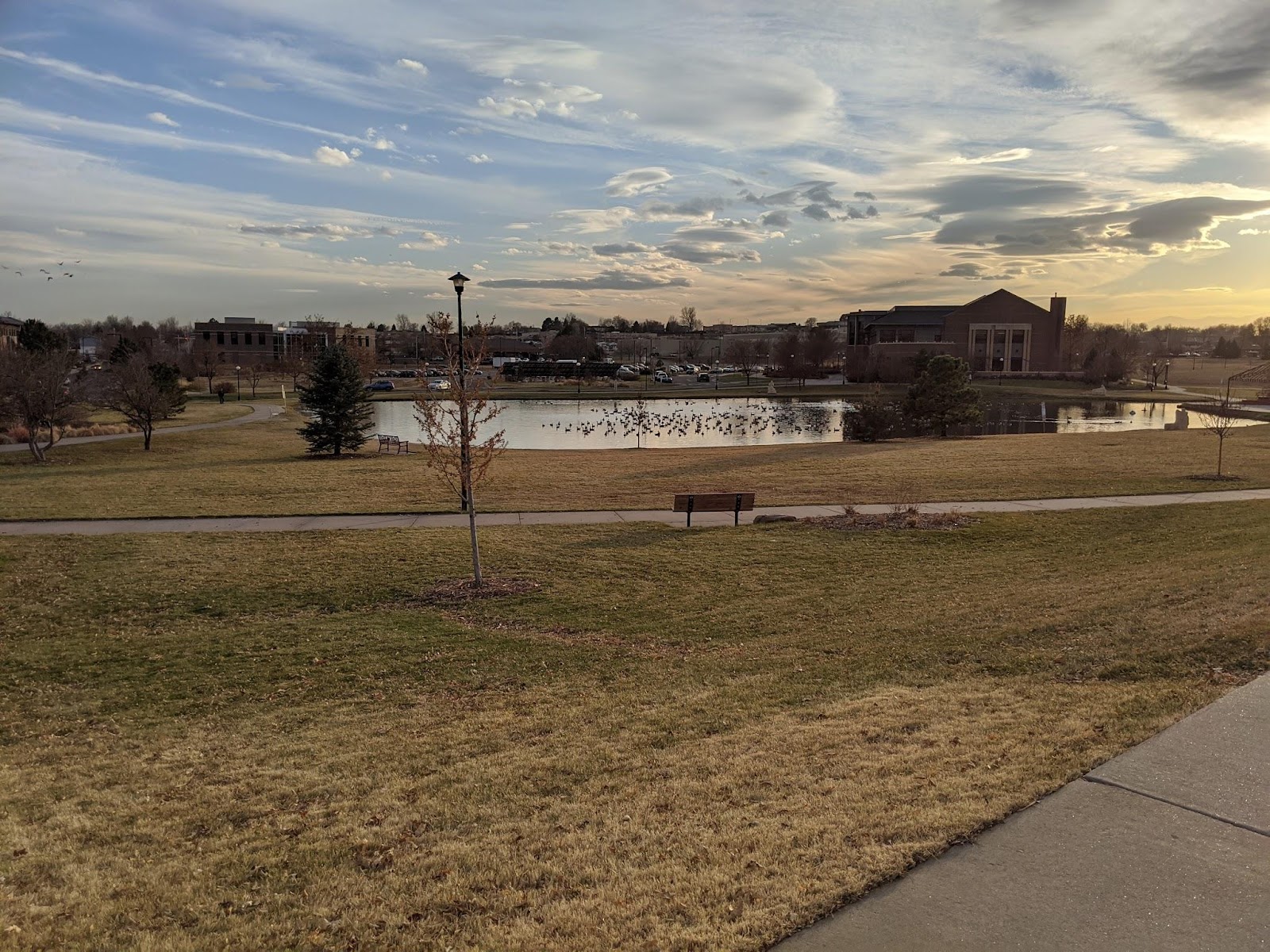 On Sunday November 17th Lucie flew to Denver. Now we are back together and preparing to head South for the winter. We decided that instead of taking off immediately we would wait for the next spell of cold weather to pass, so we would not get stuck in any of the mountain passes we need to pass through.

Posted by clyndes at 7:23 PM
Email ThisBlogThis!Share to TwitterShare to FacebookShare to Pinterest