After a whirlwind summer and fall and three days of driving from Vermont to Georgia, Craig and I settled the bus into a very spacious spot in Skidaway Island State Park in Savannah Georgia for 6 days.  It felt good not to be moving for a few days.  Neither of us had ever been to Savannah but had heard it was beautiful.  Having referred many of my students to explore Savannah College of Arts and Design (SCAD) ~ the University for Creative Careers,  I was looking forward to seeing what type of creative inspiration we would find in Savannah. We were not disappointed. 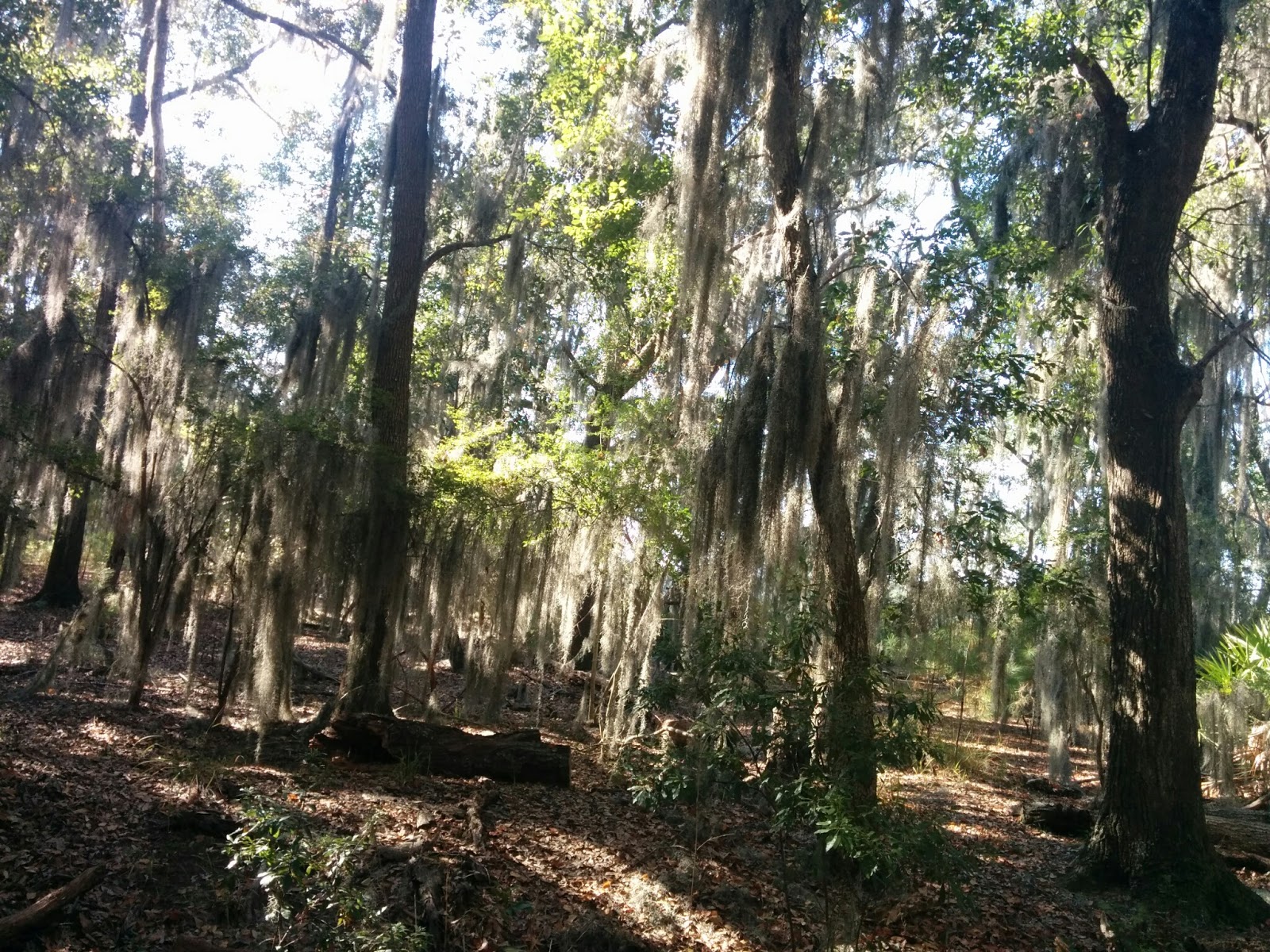 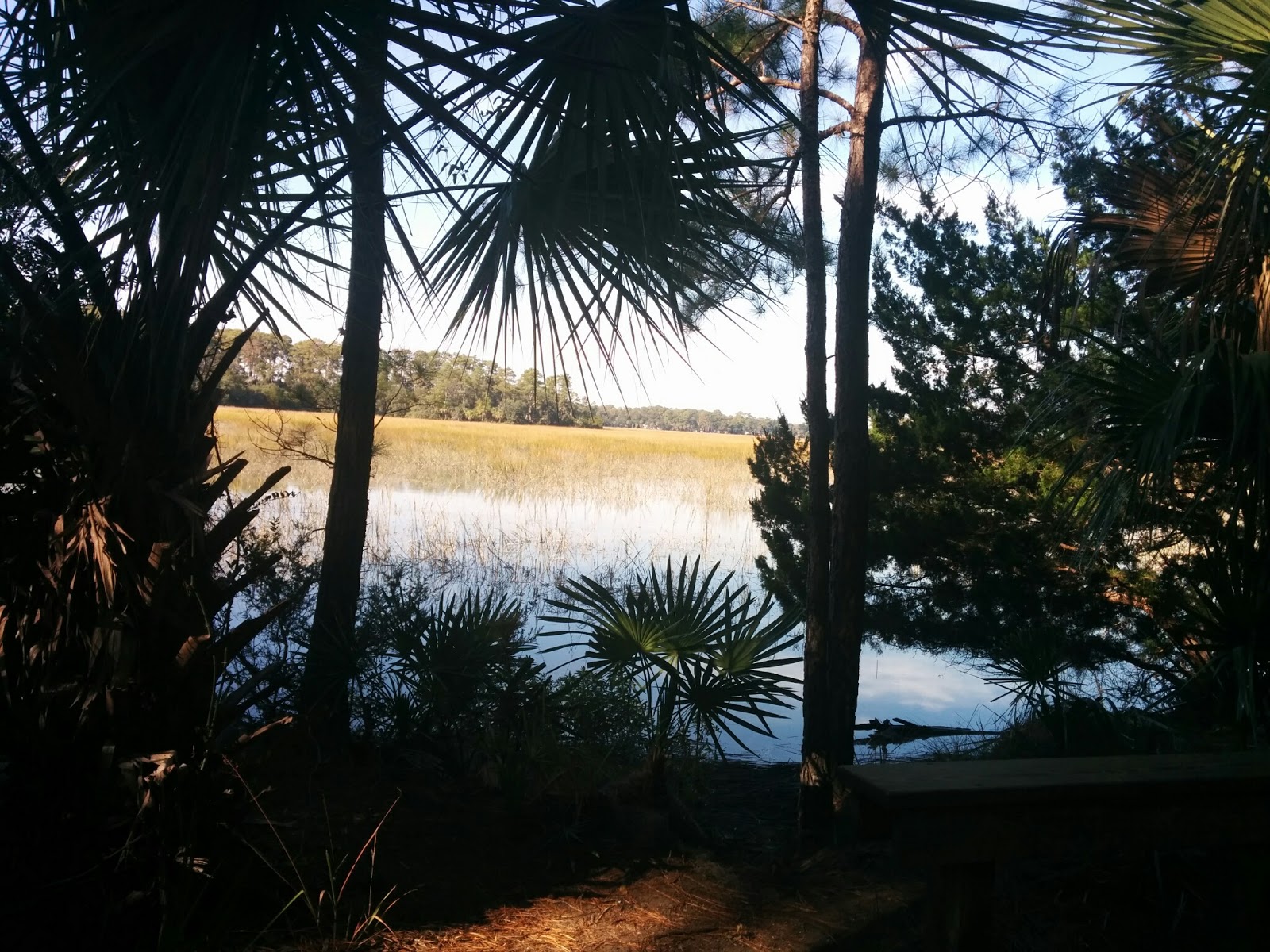 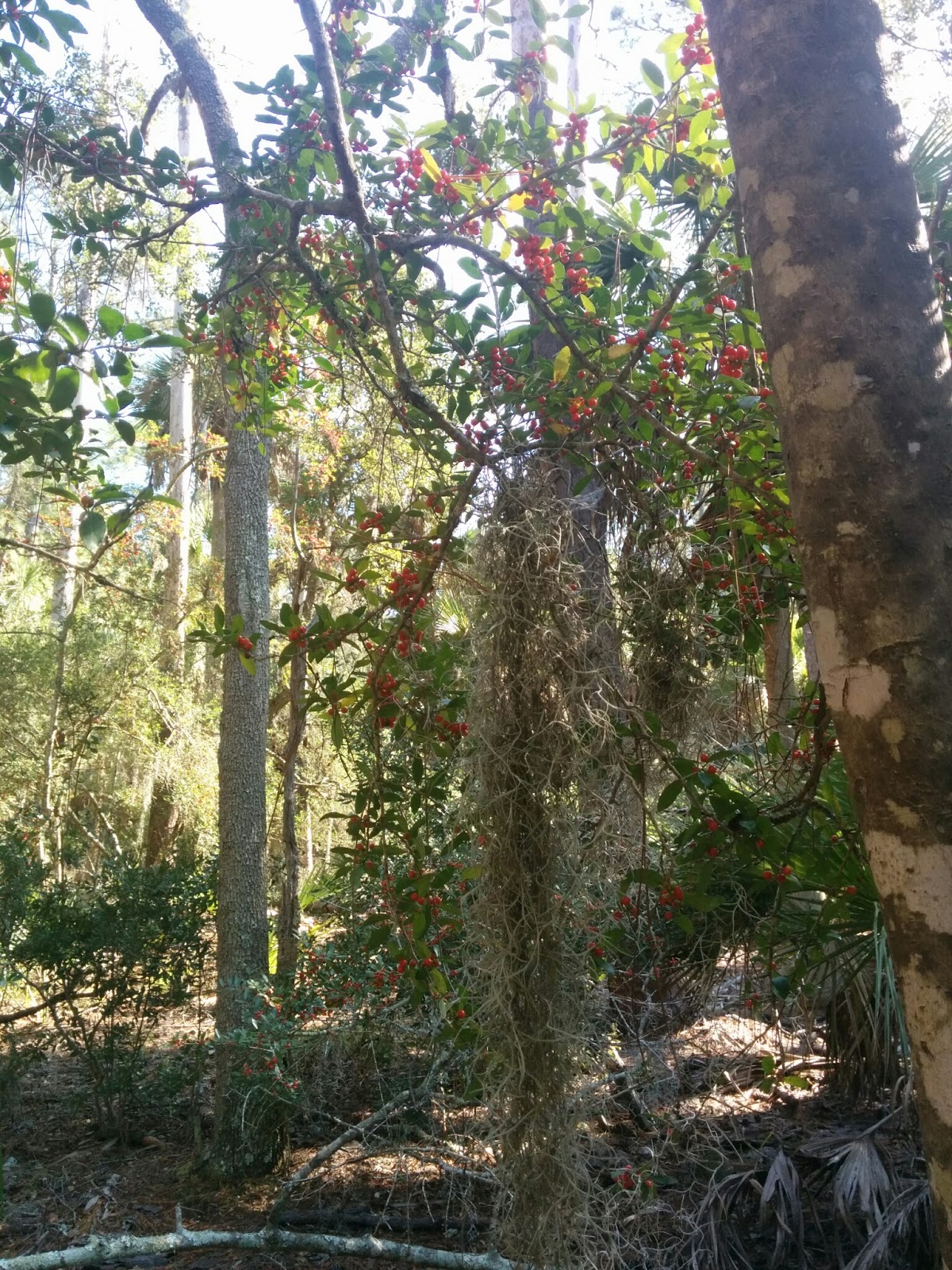 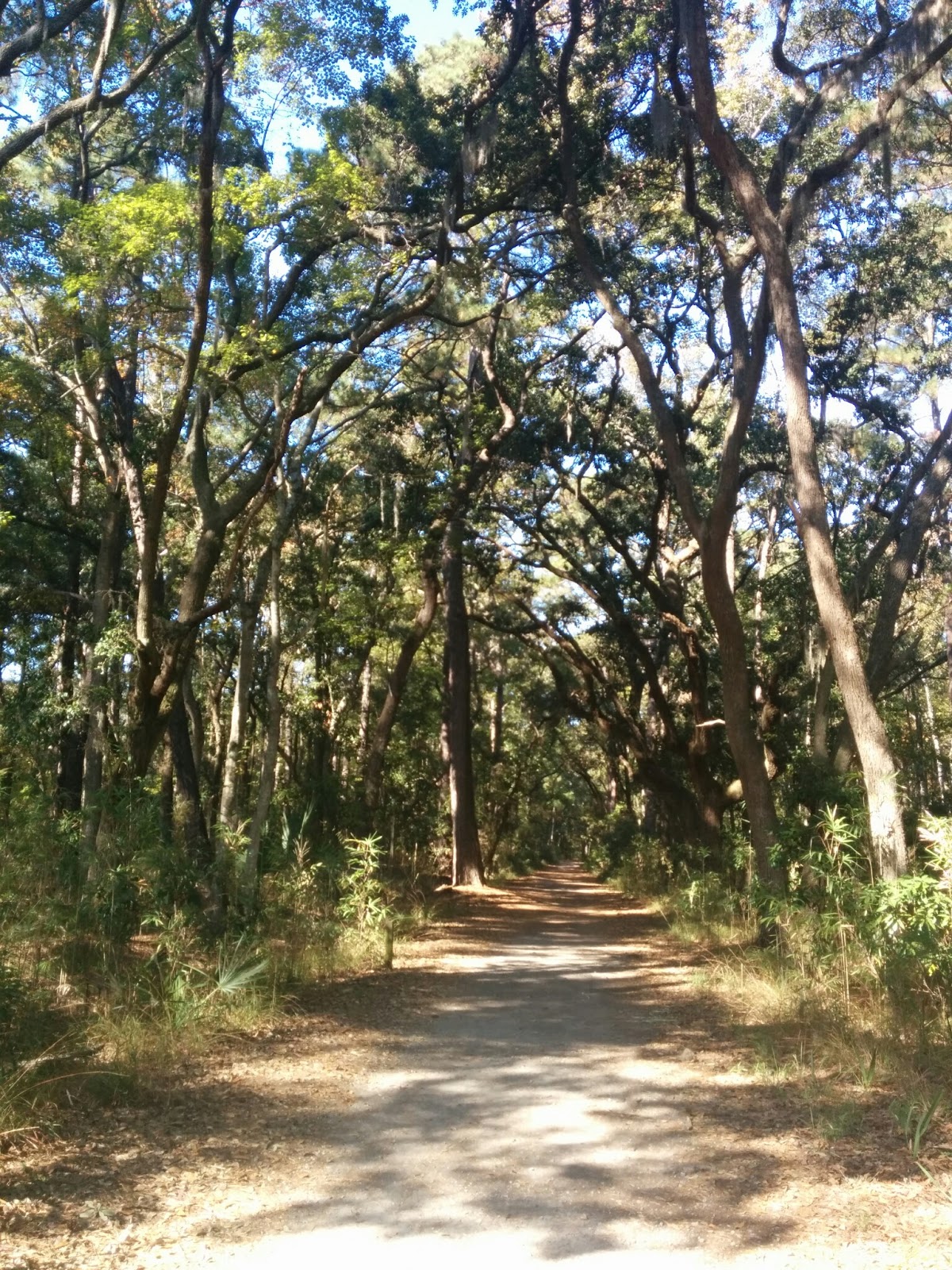 We were inspired by our walks on trails through moss draped forest of live oak,  cabbage palms, and sawtooth palmetto.  The grassy field, salt marsh, and intercoastal waters that surround the island made for a great place for me to practice using the panaroma feature  on the camera of my Nexus 5. 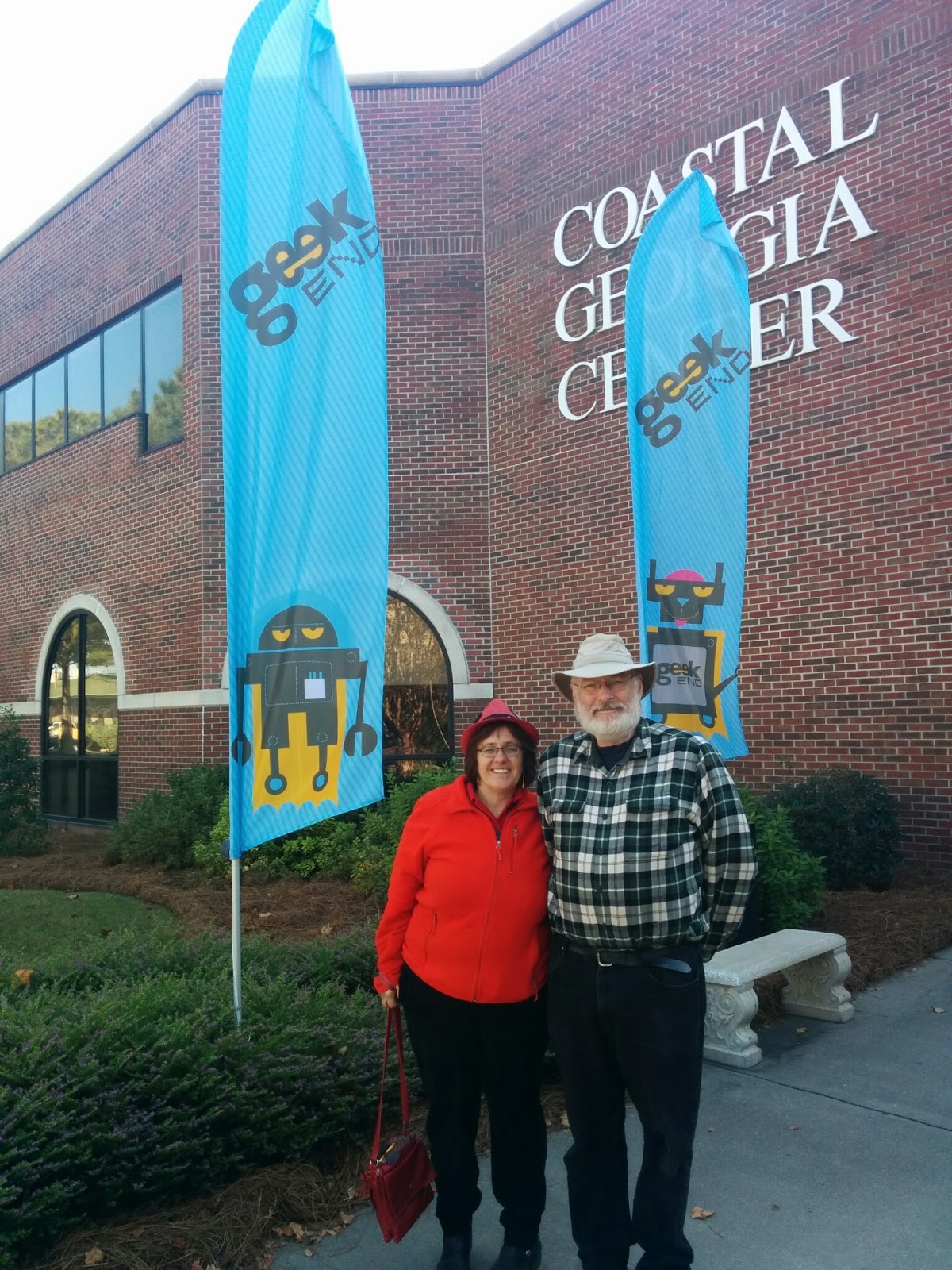 During our first excursion into the city we were further inspired by a convergence of tech-loving creatives that had gathered for a weekend of inspiration for an event called GEEKEND sponsored by the Creative Coast (a non-profit organization whose mission is to nurture creativity and innovation in Savannah.)

It felt like we had landed amongst kindred spirits.  Although we chose not to purchase tickets for the full event,  we were drawn to visit one of the free Geekend events ~ the Kodestar Arcade   (an arcade where kids who’ve built games get to show them off, get feedback and praise and feel the thrill of building something that people actually use)


Our short conversations with the co-creators of  KodeStar  and volunteers staffing the event left me inspired to put on such and event in Vermont ~ perhaps at the Generator (the Vermont makerspace we belong to.)    The  pop-up digital arcade included a festive welcome area with lots of creative energy from volunteers, photographers, and videographers, kids, parents, and Geekend attendees who had wandered over to check out the fun.  Beyond the welcome area were  three rooms set aside for the KodeStar arcade event. 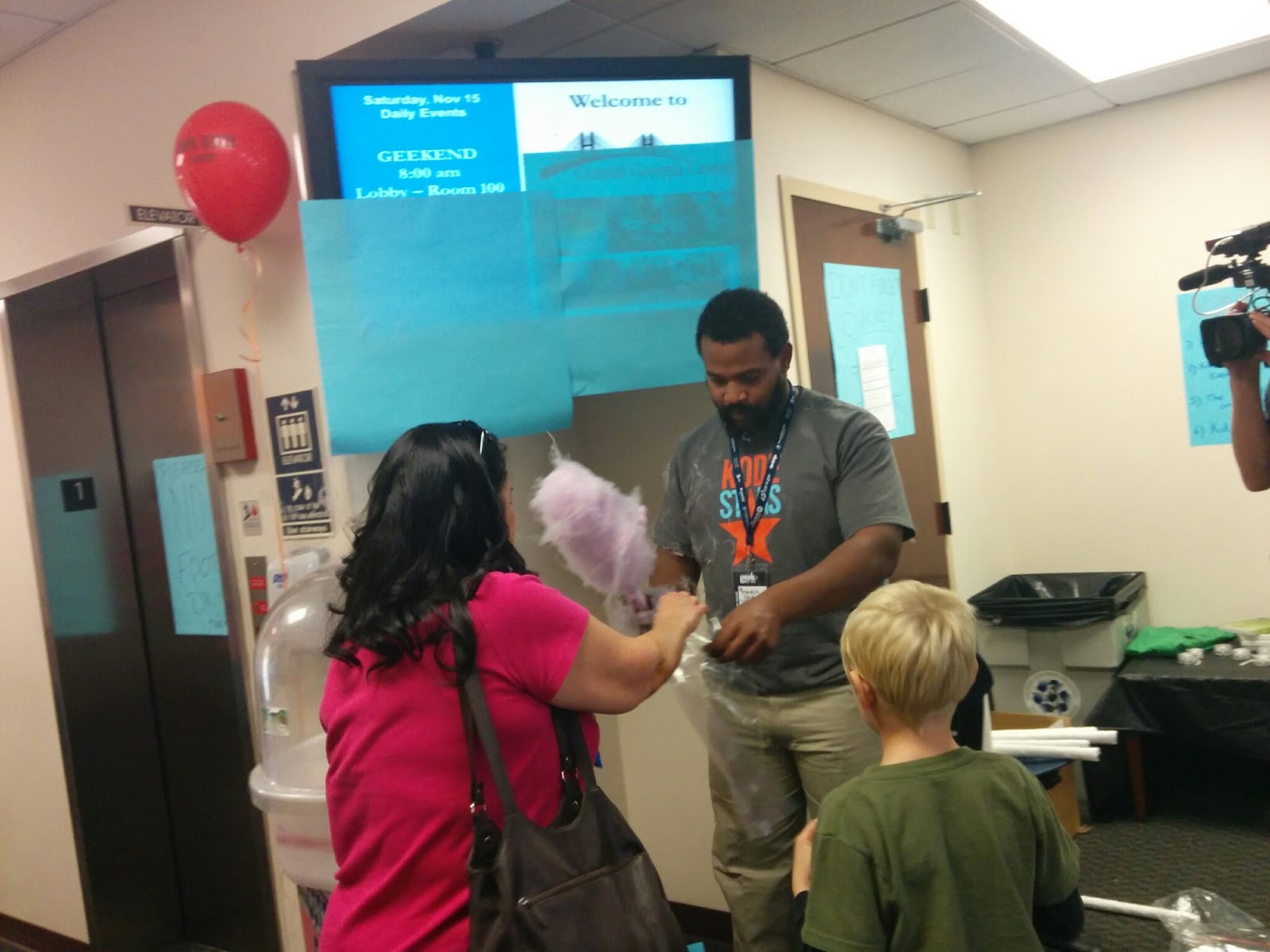 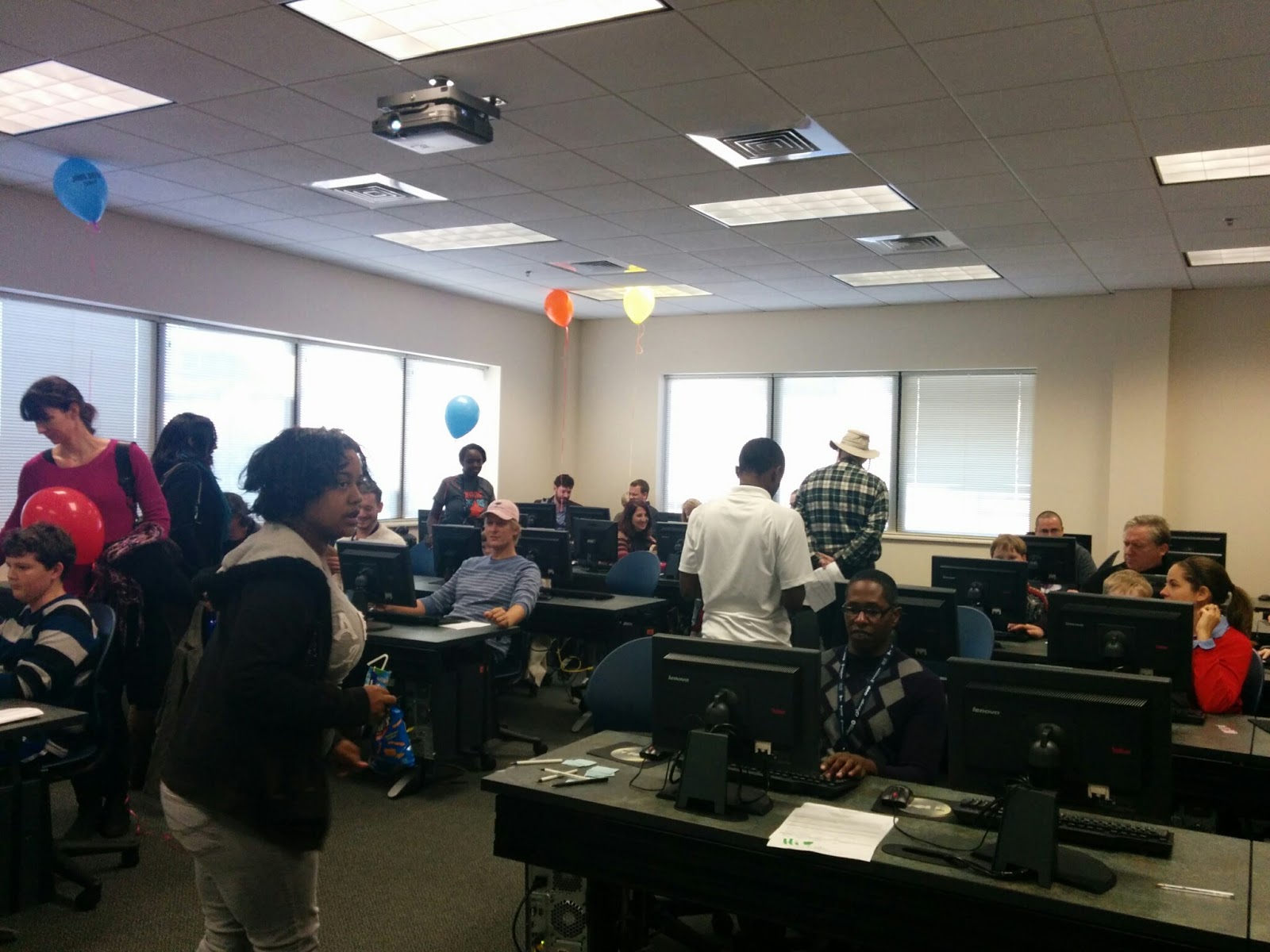 In one room we found that a  computer lab of PCs had been converted into a physical~ digital arcade by loading up one of the games from the  KodeStar virtual aracde,  adding a  KodeStar sticker to the monitor that included the title of the game and the name and age of the young game creator who had designed the game. I joined other visitors to the arcade who were bouncing around from computer to computer playing the kid-created video games. 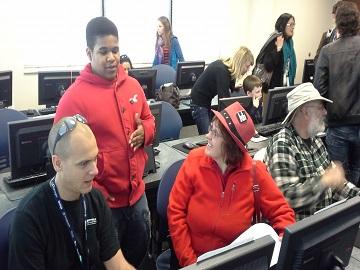 HEREX At one point, I was lucky enough to find myself sitting right next to the young man who had created the game I was playing.  I became much more interested in talking to him about his process than in playing the game, and obviously I was not the only one. The room was filled with people walking around with video cameras, audio recorders, and cameras talking pictures of the event. 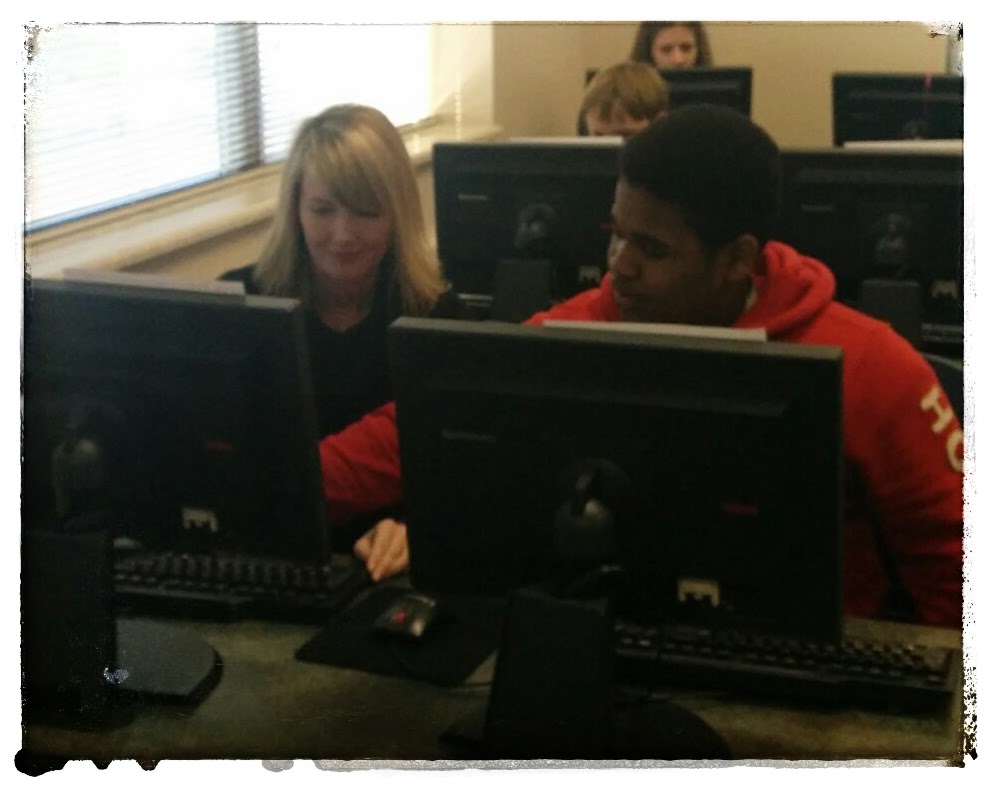 The other two rooms were set up as creative studios ~ one for low tech game design using pencils, markers, and storyboard paper templates and the other a computer lab filled with PCs running Scratch (one of my favorite tools to use with students.)   Volunteers staffed both rooms ready to assist aspiring game designers into the process of creating their own game. 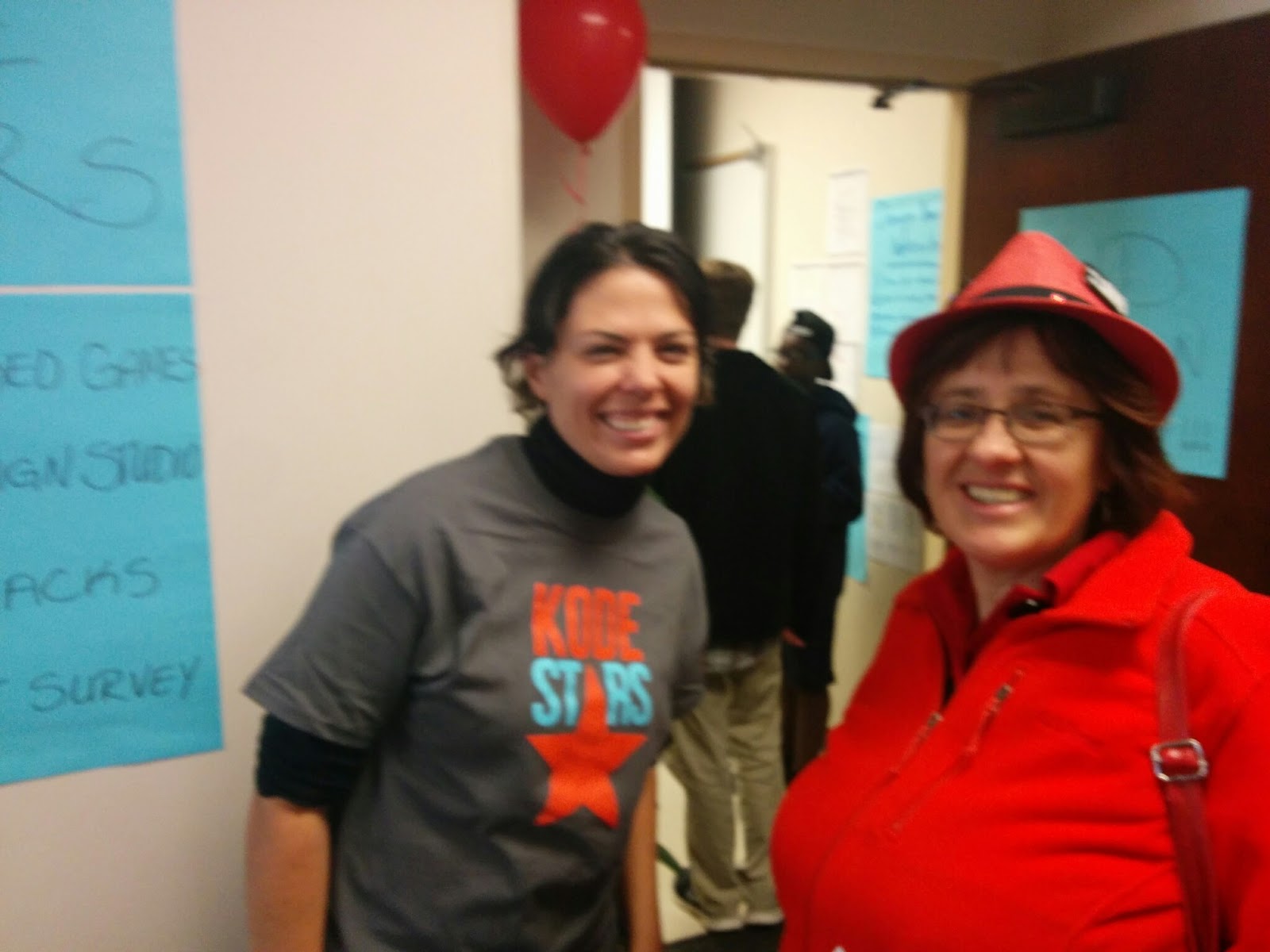 It didn't take long to discover the two creative minds behind KodeStars~ Yvonne Jouffrault & Kevin Lawver .  I only spoke to them briefly to learn more about their roles and vision for this project; they were plenty busy fielding questions from participants and making sure their event was flowing smoothly.  I'm hopeful that we'll get a chance to talk more after GeekEnd ~ perhaps even to do a Google Hangout on Air.

On our way out, we stopped by the Geek-end information desk and learned a little bit more about Creative Coast and their role in Savannah, which included hopes of a full fledged maker space.  I was surprised that an city filled with creatives didn't have a makerspace yet, and after a little web research discovered that their efforts to find funding were currently a barrier to this goal.  I loved the name of their future Maker Space ~ Maven Makers and their vision, and couldn't understand why their kickstarter had not  been backed 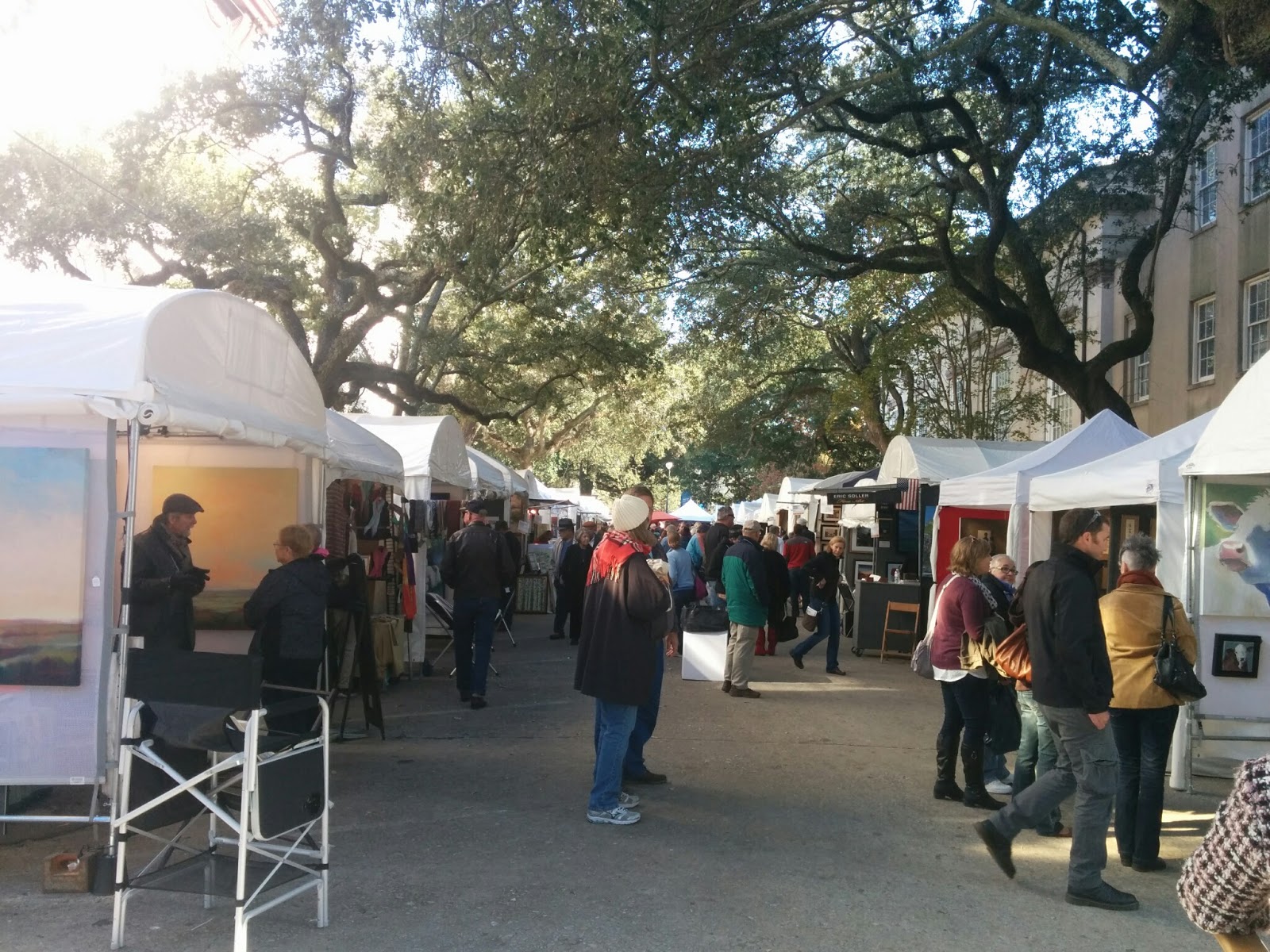 Filled with inspiration, we  continued to walk around historic Savannah's  many park squares that makeup Savannah.  In one park we found a food and wine festival was in full swing and while another park square was setup for the 20th annual Telfair Art Fair  filled with local artist displaying and selling paintings, crafts, handiwork, jewelry and other wonderful inspiring pieces.   The hard part about living in a bus, is that you have limited space and must curtail accumulating pieces of inspiration, but I did find the perfect piece to purchase from a artist who was displaying silver jewelry.

The piece,  Two Peas in a Pod, were beautiful silver earrings in the shape of an open pea pod containing two tiny black pearls.  The earrings would not only remind me of my visit to Savannah, but also of my twin boys (Adam and Matt PODD) who were often referred to as 'two peas in a pod'.  Craig offered these to me as a birthday present when he saw me admiring them, and I accepted the gift.   One of the things I have learned from Craig's interest in jewelry as art is that it fulfills the need for art without clutter as described in this Navajo blessing "May you walk in beauty".    How inspiring it was to walk amongst all the beauty we saw at the art fair and talk with the artist about their craft.


We ended the day with a lovely birthday dinner at Billy's Place restaurant where you can find good food, fantastic hospitality and music.  After dinner we gave up our table to other hungry patron and moved to the piano bar enjoying the live music of two talented piano players before we headed back home to the bus.


For the next few days we caught up on work.  The campground does not have wireless available at their campsites.  But Craig's amazing wireless configuration on the bus was able to leverage the mediocre Verizon signal to provide us the bandwidth we needed to catch up on work.  Craig handled the service request that had piled up at his school during his 3 days of driving and moved some projects along with his team. I worked on the final projects for the two online graduate courses I teach.  Mid afternoon, we'd take a break each day and explore the nearby trails before it got dark, and  put in a few more hours after dark. 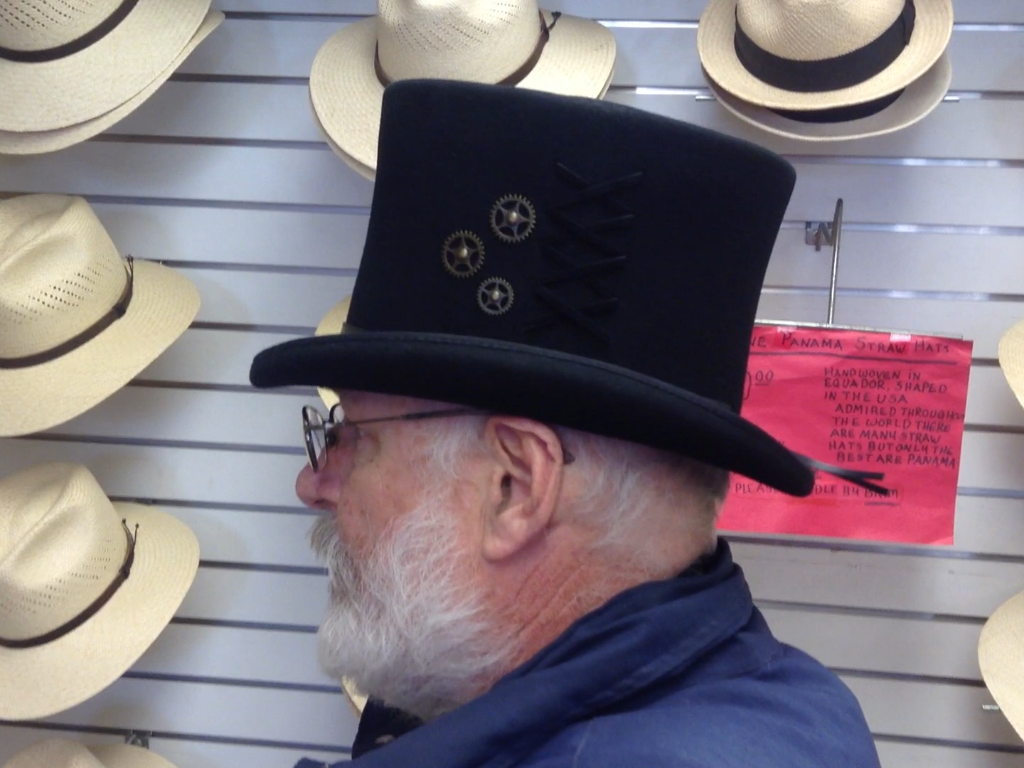 After our "catchup on work" session, we escaped into Savannah one more time,  this time for a river walk.  A cobbled stone pathway lead us to the riverside where we enjoyed the view of the bridges and ship along the river.  We wandered in and out of shops and had an absolutely lovely afternoon lunch at Vics on the River - a second floor restaurant with fantastic views and delicious entrees.   Craig was even inspired enough to purchase a Top Hat for a maker project he's been planning. 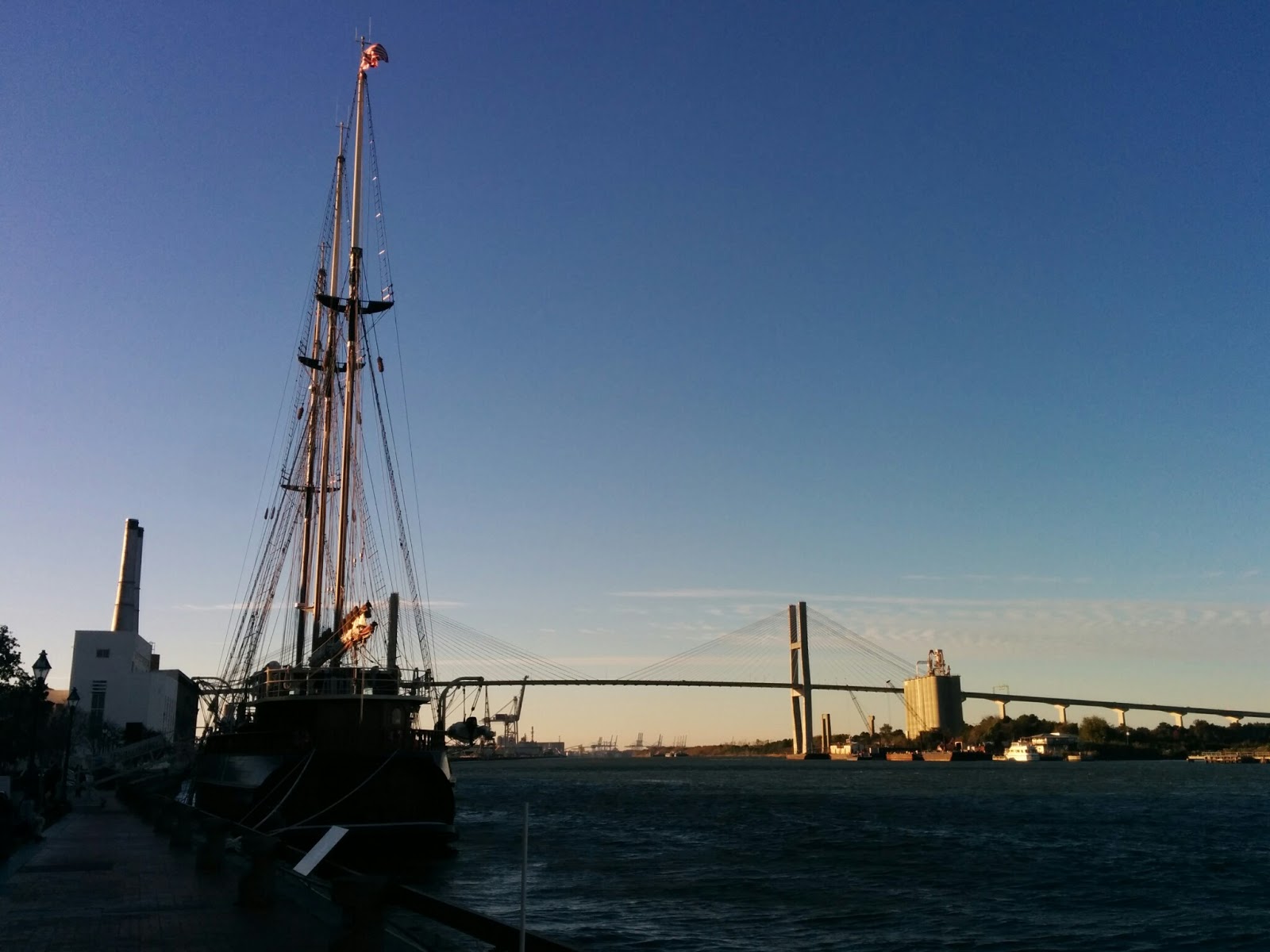 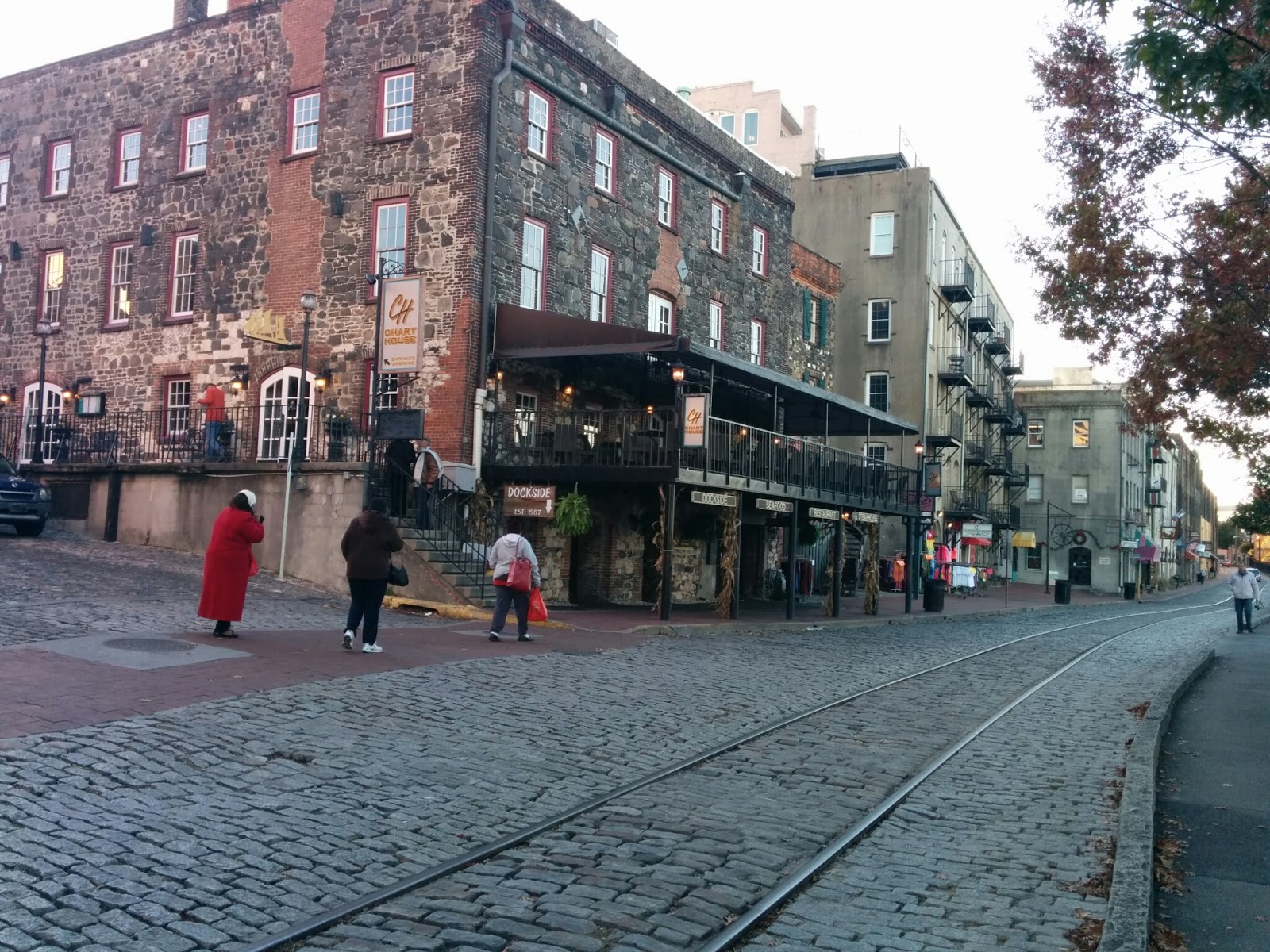 After six days, we packed up and drove the bus out of Savannah towards out next destination,  Cedar Key, Florida, totally inspired.

Posted by Lucie deLaBruere at 12:06 PM